Youth Programme Battles it on Court 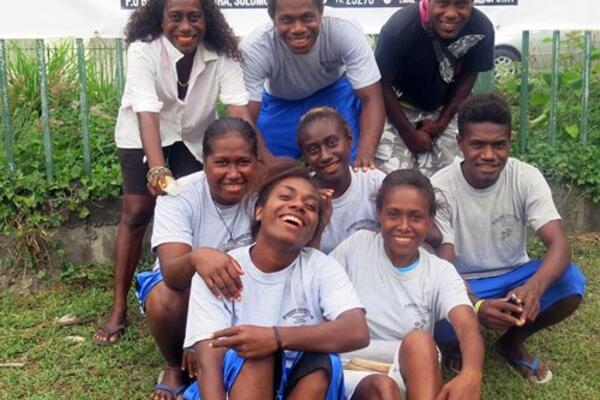 Youth @ Work has given Honiara youths a chance to succeed in life by empowering youths to be a useful and proud member of society.
Source: SPC
Share
Friday, 12 July 2013 07:54 AM

A little bit of rain was no match for the downpour of talent at the Youth @ Work netball match this week in Honiara, Solomon Islands.

Eight teams took to the courts at the NPF Netball compound to battle it out for a win.

Mia Rimon, Coordinator of the Solomon Islands office for the Secretariat for the Pacific Community says it’s great to see such an enthusiastic turnout.

‘Everyone has really picked up this idea and run with it,’ she says. ‘It’s such a good chance for all the hard working youth in the programme to relax a little and get involved in some healthy competition.’

Youth @ Work is a 20 week work internship program under the Ministry of Commerce, with partners Ministry of National Reconciliation, Peace and Unity and Ministry of Women, Youth, Children and Family Affairs, implemented by the Secretariat for the Pacific Community (SPC) with support from the Pacific Leadership Programme under AusAID.

The program teaches unemployed young people vital job skills and places them in an internship position either in government, the private sector or state owned enterprises.

More than 830 young people have taken the program since it began in 2012 and a whopping 39% have found ongoing employment since completing the program.

Youth @ Work coordinator Sandra Bartlett says the netball championship is a good way to build skills that could be useful on the job.

‘Netball is a great game for teaching team work,’ she says. ‘And especially getting the young guys to work together with the girls in a team is a great way to break down some of those gender stereotypes.’

The current Youth @ Work participants have just finished their 3 weeks of orientation and will continue with the program until December this year.

‘We’ve got 330 people in this group,’ she says. ‘They’re all keen and wiling to work hard throughout the program to find employment. But today I think they’re more focused on shooting goals.’

The courts were covered in bright colours as the games began. Each team designed their own uniforms for the competition and there were guys in grass skirts, brightly coloured sweat bands and screen printed t-shirts, all organized by the youth using their own initiatives and funds.

Dillion Teui says she took her inspiration from some of the sports shops around Honiara to design the outfit for her team, the Frigates.

‘It took about a week to make the costumes,’ she says. ‘I picked bright colours and made a matching top and skirt for everyone to wear. We have three guys in our team so it’s pretty funny to see them in the short skirt.’ The SPC Coordinator Mia Rimon cited that the Frigates captured the “Serena Williams Look” in the uniform competition.

Teams will be awarded prizes for best teamwork, best uniform as well as the overall winner of the competition taking home 20 Youth @ Work T-shirts and $500.

The Semi Finals and Grand Final matches will take place today, and should be a feisty showdown for the top prize.

Youth @ Work has given Honiara youth a chance to succeed in life by building up the whole youth to be a useful and proud member of society. The Youth @ Work kids at the netball tournament commented that they are the agents of change for their society to make the Solomon Islands a better place for their bright futures.