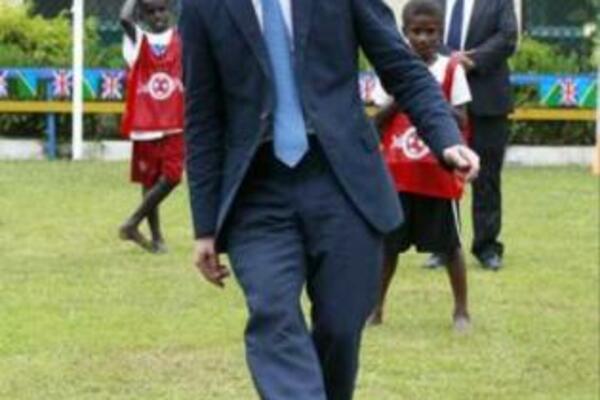 The Duke of Cambridge's first kick tucked the ball into the bottom right corner, sending the crowd at the Commonwealth Youth Conference in Honiara into spasms of delight.
Source: birminghammail.net
Share
Wednesday, 19 September 2012 08:17 AM

A youngster from the Solomon Islands has taken on the future king of England in a show of football prowess - and won.

"He was good, yes, but not as good as me," said Philemon Fatai, 13, after he stopped two of the Duke's three soccer balls from finding their mark.

William was reluctant from the outset.

"Oh, here we go again, this could go absolutely anywhere," he said.

His first kick tucked the ball into the bottom right corner, sending the crowd at the Commonwealth Youth Conference in Honiara into spasms of delight.

But in penalty heartache for the Duke, the youngster stopped the next two from finding their mark.

The Duke fared better earlier during an impassioned speech about the importance of the Commonwealth, when he told the crowd of youngsters they were its "heirs and successors".

"The Commonwealth is more relevant today than it has ever been," he said.

"Now and in the future it has the potential to be a guiding light to millions of people around the world....

"It reminds us of what we have in common and what our responsibilities to each other are."

Tens of thousands of islanders again turned out to watch the royal couple as they toured a cultural village on their second day in the Solomon Islands.

In an ironic twist on Monday, bare-breasted women and men in loin cloths greeted the royal couple at the start of a tour of nine bark huts showcasing the individual music, styles and handicrafts of the Solomon Islands nine separate provinces.

Music ranged from fearsome warrior chants to a remarkable softly pan piped melody of God Save The Queen.

She was unexpectedly adorned with a decorative headpiece made from exotic frangipani and bougainvillea.

The couple then split with the Duke going on to make his speech while Kate met a group of women and young girls all working to highlight inequality in Melenesian society.