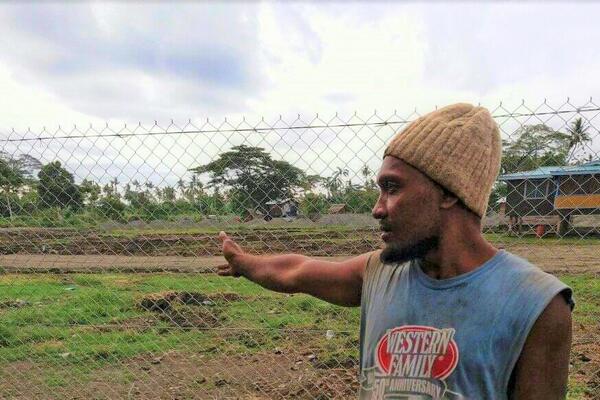 Eric points out the area where his house once stood.
Source: Jeremy Gwao
By Jeremy Gwao
Share
Monday, 09 November 2020 09:32 AM

“I was helpless, I just stood there and watched as my home was demolished,” said Eric Saru, a 30-year-old father of four.

“It was the most stressful and difficult time for me, I think of my family and how we will live and survive.”

More than 15 homes were recently demolished at the Henderson area East of Honiara to make way for new development by Chinese owned businesses, who are said to be the legal owners.

Eric and others in the area have built homes and lived in the area for the past 10 years or so, they grow vegetables and have a small mini market opposite the international airport.

“I have to accept that we have to move, but we have lost a lot. Apart from our house we also no longer have access to the mini market area, which has been our main source of income for many years,” Eric said as he pointed out the area where his house once stood.

"Our source of survival is all gone, to see this happening to me and my family is just hard for me as a father.”

He says that in this period of uncertainty caused by COVID-19 he hopes that the government would consider their plight.

“We have relocated but the area we are now in has no water, and we have to carry water from sources far away. I just wish that we get some assistance to start over and rebuild our lives as a family.”

The Commissioner of Lands, Alan McNeil, told Solomon Times Online in a recent interview that the land in Lunga, Henderson and parts of Alligator creek are under private ownership, and they have been for a long time now.

“Anyone who has a registered interest in land like a fixed term estate, has every right under the law to transfer the land to anyone else, no matter where they are from”, McNeil says.

Solomon Islanders are now buying land in areas that were known in the past as informal settlements or areas deemed unsuitable for future growth due to topographical and environmental constraints.

“At least 99 percent of the new grants that the land board has approved in recent years have gone to indigenous Solomon Islanders”, McNeil says.

“It is very rare to see any record of new grants going out to foreigners."