Yam Houses of the Trobriand Islands: Prestige, Magic and Drought 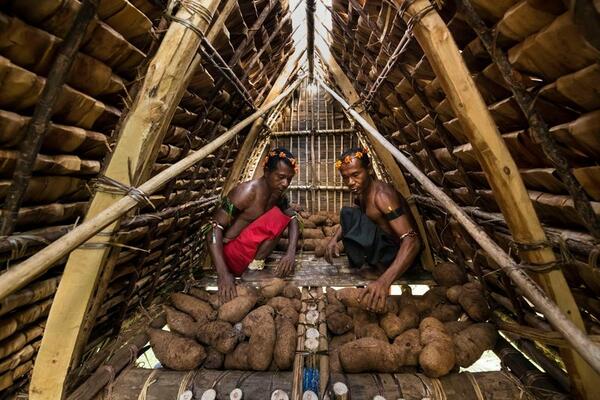 But the residents of these stately structures, at first glance, aren’t so dazzling—nor are they human. For a few months each year, these bwema, or yam houses, will be filled with piles of brown, bulbous tubers.

Kiriwina is part of the Trobriands, a cluster of small, coral islands off the coast of Papua New Guinea that have long captured the minds and loins of Western anthropologists and travel writers. In the early 1900s, Polish anthropologist Bronislaw Malinowski spent several years studying the islands and wrote an ethnographic collection that gained widespread popularity across the West. His observations of the islanders’ seemingly sexually explicit dances and relaxed attitude toward extramarital affairs put the Trobriands on the map as “The Islands of Love.”

Since then, travel publications and news outlets have depicted the islands as a place where affairs are encouraged, dances are suggestive, and sex is pervasive. But, for most Trobrianders, what lies at the heart of family and community—the very reason for dancing—is yams.

“They are, in many ways, more important than money,” says Dr. Michelle MacCarthy, an anthropologist and assistant professor at Saint Mary’s University who has spent several years on the Trobriand Islands studying cultural representation, notions of authenticity, and exchange. Nearly every family has a separate kaymata garden exclusively for yams, grown for someone else in the community, often a sister, mother, or village headman.

No matter who receives them, the tubers, MacCarthy says, touch everyone from a bride-to-be to the Paramount Chief. They inspire annual celebrations, enable proper grieving, and even structure the calendar year, which aligns with the yam-harvesting cycle. The Kilivila word for “year” is teytu—also the word for the esteemed Dioscorea esculenta, or lesser yam.

But, in the very soil that carpets each kaymata, a change is underway. According to Dr. MacCarthy, recent years have seen greater food insecurity across the islands, and a scarcity of yams. Harvest after harvest, towering bwema have stood achingly empty. Heaping piles of bulbous yams, once a key feature of every kaymata garden, have grown smaller or disappeared.

As yam yields dwindle, the very tastes, sounds, customs, and beliefs integral to life on the Trobriands are beginning to change. While no one has pinpointed how yams first gained such high regard across the islands, it’s not difficult to make a case for their contemporary adoration. Relative to other root vegetables grown in the Pacific, they’re exceedingly nutritious—high in fiber, vitamins A and C, and protein. According to Dr. MacCarthy, they’re also trickier to grow than most other crops on the islands, and, unlike root vegetables such as sweet potato and cassava, they can only be grown once a year.

“Any fool can stick some [sweet potato] seedlings in the ground,” she says, recalling her own planting endeavors. “It doesn’t take any particular skill.” But this kind of yam, she notes, require deep knowledge of soil composition, frequent thinning, staking of the vines, and an expert assessment of ripeness. A bit of magic helps, too. Malinowski recorded countless spells performed by a towosi, or professional gardening magician—although MacCarthy says most gardeners now engage in garden magic on their own accord.

Why go to such great lengths to plant yams? Traditionally, the tubers have been a kind of social currency. Although land ownership in the Trobriand Islands follows the matriline, married women often live with their husbands—meaning few people live on land that belongs to them. Rather, they obtain the right to live on, and cultivate, someone else’s land, as long as they’re on decent terms with the village elder. But this can all change on a whim. To remain in the good graces of the village elder, says Dr. MacCarthy, villagers must pay their dues in yams—or else get kicked out.

“The headman felt that [my host father] wasn’t producing enough tribute in yams,” she says. Meanwhile, her host father, Mata, couldn’t claim any official right to the land. His mother was not originally from the hamlet he was born into, as she had moved out of her natal hamlet after marrying his father. So one year, after coming up short in yams, Mata was booted out.

“There’s an expectation for each household to produce yams so that it can meet social obligations,” says Dr. MacCarthy, “and no amount of money will substitute for that.”
There are two native species of yams grown in the Trobriands, the long kuvi yam and the lesser teytu yam. True to its name, the long yam can grow up to 4 feet in length, and is used almost exclusively for decoration, while the more bulbous teytu yam is exchanged and eaten. After the harvest, both varieties enter someone’s yam house, stacked meticulously and kept on display until they’re needed for a feast or social function. Carefully constructed to allow for proper circulation, yam houses keep these lesser yams from spoiling for up to eight months. Most teytu yams will be eaten throughout the year, but if any remain long enough to rot, it’s a celebrated sign of an abundant crop.

While some teytu are given as tribute, others are saved for funeral feasts. These funerary ceremonies typically take place several months following a family member’s death to allow relatives to amass sufficient goods, including yams, which are doled out raw or cooked (most often, roasted). Yam exchanges during these feasts are elaborate, and follow a complex set of rules. “You give yams, you receive yams … It wouldn’t be the same to just eat the yams that you made yourself,” Dr. MacCarthy says. “The act of exchange is what matters.”

For a long time, Milamala, the months-long harvest period during which these mortuary feasts take place, has been marked by celebration. Kicked off by gogebila, the ceremonial carrying of yams from individual gardens to the yam-houses, it’s a period of recreation, tradition, and play. In his book Argonauts of the Western Pacific, Malinowski elaborated in great detail on these multi-village festivities that lasted from a few days to more than a month. “During such a time of festivities, the inhabitants of a village will dance day after day,” he wrote, “in full dress … with facial painting, floral decorations, valuable ornaments, and a head-dress of white cockatoo feathers.”

Milamala is contingent upon a bumper crop of yams, and traditionally has entailed rich, tuber-heavy feasts and fierce dancing competitions funded by the chief. It’s during this period that the islands burst to life with color, sound, and kalibom, a celebratory nighttime dance featuring mweki, the pelvic-thrusting move that shocked 20th-century Western travelers and Christian missionaries.

But, according to Dr. MacCarthy, this hasn’t happened in over a decade. A marker of a fruitful harvest, traditional Milamala has recently become obsolete. In the hopes of drawing tourism, an entrepreneurial Trobriander running a lodge threw her own iteration in 2009. But for most Trobrianders, it was blasphemous. There was nothing to celebrate, and nothing to celebrate with.

Particularly bad droughts hit in 2009, 2010, and 2016, and, amidst these poor growing conditions, the islands’ population has spiked. More hamlets have sprung up, leaving less arable land to go around. Over-farming has drained the soil of important nutrients. Yams, once harvested in surplus, are growing scarce—threatening to unravel the social and political fabric of the islands.

“Chiefs are expected to have full yam houses—that’s how they materially demonstrate their wealth, their power, and their ability to receive tribute,” says Dr. MacCarthy. “For a chief to have an empty yam house is ultimately to say that he’s not a worthwhile leader, because he can’t compel people to grow yams for him.”

Due to these modest harvests, the current Paramount Chief has fewer wives, fewer people expected to produce yams for him, and ultimately, fewer yams to offer, threatening his public image. And as food insecurity has increased the need for intervention from the national government, traditional village leaders are beginning to lose some of their political power. “It shifts the governance even further toward a Western style,” she says, “with the chief having an ever-less important role.”

Poor yam yields have also increased most families’ reliance on store-bought goods, purchased with cash brought home by Trobrianders working in urban centers. It’s also pushed people to cling to resources and develop a nuclear-family-centered focus, says Dr. MacCarthy. “If you diminish the importance of those extended kinship networks, you diminish the need for yams, and vice versa.”

But the most dramatic social change, Dr. MacCarthy says, is that yam theft—once considered the ultimate taboo—has become a daily occurrence during droughts. Yams were once carefully stacked in a conical heap and left out for display in the kaymata for months before being ceremoniously transported by young men and women to the recipient’s yam house. But people have stopped displaying their yams. Those who can afford it pay for a truck to lug the tubers to the village.

“In the past, stealing was seen as the most shameful thing you could possibly do—but it happens all the time now,” says MacCarthy. “People are hungry, and they’re desperate, and they’ll take what they can find.”

Outside of the Trobriands, this hasn’t widely been recognized as an issue of climate change. But it’s difficult to avoid seeing it as one. The islands — subjected to the whims of El Niño, the Trobriands are no strangers to wild weather, aberrant growing conditions, and occasional scarcity. But researchers have linked warmer temperatures to intensifying impacts of El Niño, which doesn’t bode well for an increasingly hot Papua New Guinea.

Rising sea levels, which have been surging locally by around 7mm per year since 1993—twice the global average—will cause flooding, and eventually, a dwindling availability of land. Across the board, agriculture in the Trobriands is projected to soon begin to flail, impacted by heat stress on crops, changes in precipitation, and extreme weather events.

The immediate fate of the Trobriands’ yams is uncertain. With any luck, next year will bring heavier rainfalls and a proper Milamala, with feasts, elated nights of kalibom, and yam houses full to the brim with ripe teytu and colossal kuvi. But, as weather patterns become increasingly erratic, it’s difficult to imagine a sustained future of abundance.

Already, Trobrianders are beginning to grapple with what the future will look like.
Dr. MacCarthy hasn’t been back since 2016, but she recalls, in her last year, a sweeping sentiment of unsettlement. “Most Trobrianders recognize that there are climatic conditions that are beyond their control,” she says. “But there was a growing anxiety around the future. Like, ‘What are we supposed to do? Growing yams is part of who we are.’”