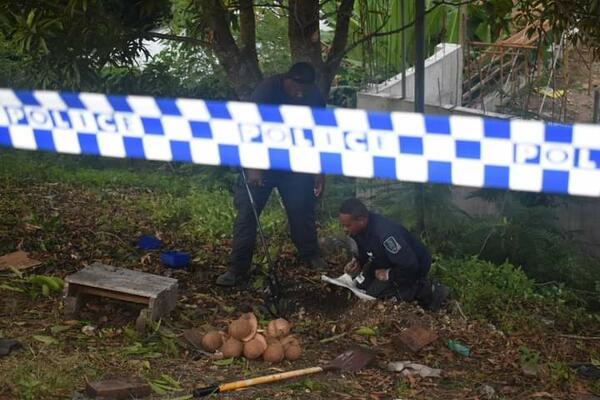 The Royal Solomon Islands Police Force (RSIPF) has confirmd that they responded to a bomb blast which killed a male person and left two others in critical condition.

Officer In-charge (OIC) of the Explosive Ordnance Disposal (EOD) Team, Inspector Clifford Tunuki says, “One of the four casualties has been confirmed dead, the other two in critical condition and one has some minor injuries.”

Inspector Tunuki says, “Based on information we have gathered some youths came together at the place of the incident (Legakiki) to do a fundraising drive. They prepared some food and selected a site and started a fire to cook without realising that there is a bomb laying underground on the location which they built the fire on.”

He says, “Police have responded to the incident and secured the scene after the blast. RSIPF Forensic and EOD team are working together to investigate the sad incident. The scene is cleared but still subject to investigation.”

Mr Tunuki says, “EOD experts have identified the bomb as a US 105mm High Explosive Projectile, remnants from World War II. Other parts of the bomb was safely transported to Hells Points since the base of the bomb still contained explosives for render safe.”

“My condolences to the family of the deceased for the tragic loss of one of their family members,” says OIC Tunuki.