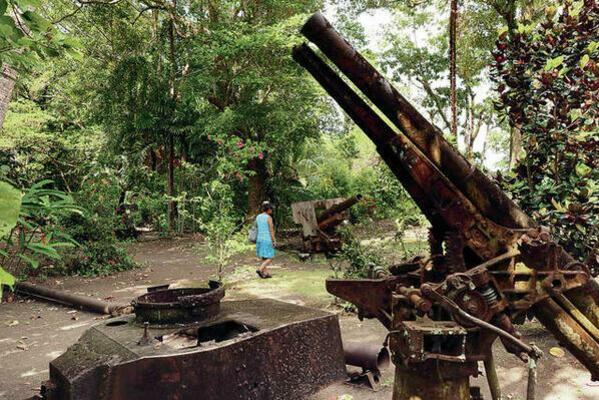 Tucked behind a forest cover one kilometre from the main road is Vilu war museum. It is about 25 kilometres away from Honiara in the North Western side of Guadalcanal.

Well known for its World War two relics, the Vilu war museum is owned by a local, Mr Anderson Dua.

"Today we have no visitors and we have no money to maintain the museum and its workers”, Dua told Solomon Times Online.

An overseas visitor to the museum in 2018 blogged that Vilu certainly wins the award for the War Museum in the Solomon Islands with the best manicured gardens.

"Gigantic grasses and falling trees are now all over the museum unlike before’’, Dua says.

He says since the workers have been laid off, he has no one to support him in maintaining the museum's grounds.

Since the beginning of 2020, Dua says no-one has visited Vilu museum. Like other tourism operators, Vilu is feeling the brunt of the COVID-19 impact.

In the beginning of June, the National Statistics Office (NSO) reported that the number of tourist arrivals fell 48.6 per cent in the first quarter of 2020.

With this, Dua is calling on the government to support him at this time of crisis.

"I think the reason why most visitors come to Solomon Islands is to see those world war two relics. Vilu War Museum is keeping the original World War II relics from both Japanese and USA which include war tanks, war planes, machine guns with other remains of World War II,’’ Dua says.

He says Vilu Museum is not only his family’s interest but it should also be in the government’s interest especially because of its history.

Vilu war museum possess US, Japanese, Australian, Fijian and New Zealand memorials, four large Japanese field guns and the remains of several US and Japanese aircraft, including a Betty bomber, a Lightning fighter and a Wildcat fighter whose wings can still be folded as they were for naval carrier-borne operations.

Dua says Vilu war museum is a registered entity and has, over the years, contributed to the country’s economy.

"So if relevant authorities can financially support me, just a bit to enable me to manage the museum’’, Dua says.

Vilu war museum has over the years struggled to maintain its operations. While it boasts some of the best World War II relics, online reviews revealed that there is more its management can do to meet international standards.

Meanwhile with the closure of international borders, leisure trips are still banned by most countries, including Solomon Islands.

The usual gathering of the world war two anniversaries in August has also been put on hold by the Prime Minister and Cabinet.