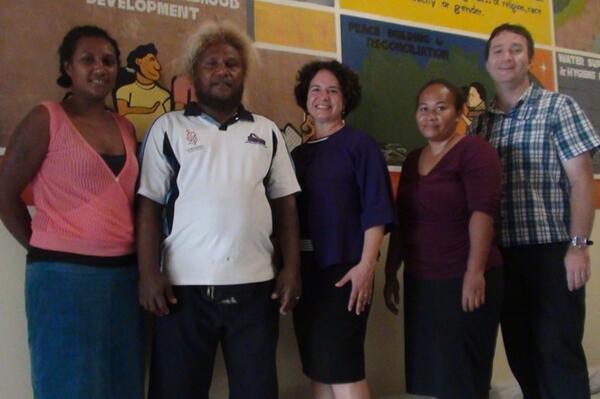 World Vision’s faith-based approach for tackling violence against women in the Solomon Islands will be showcased at the Commission on the Status of Women (CSW) meeting at the United Nations Headquarters in New York on 7 March 2013.

The CSW is a 10 day meeting where leaders gather to evaluate progress on gender equality, identify gaps and challenges, set global standards and develop policies to promote gender equality and women’s empowerment worldwide.

World Vision representatives will present to leaders - who will be making recommendations on how to achieve gender equality – the Channels of Hope approach that engages faith leaders, churches and communities and uses the bible to change people’s perceptions and treatment of women.

World Vision Solomon Islands Gender Advisor Koisau Sade said faith leaders were often very influential members of communities in the Solomon Islands and that their personal beliefs and values could inspire the entire community to take responsibility and action over issues that concern them.

“People trained in the Channels of Hope approach are equipped with the knowledge and the tools to mobilise their faith congregations and other groups to combat gender inequality and form networks to support the most vulnerable people,” she said.

“In the Solomon Islands, where two in three women experiencing physical and/or sexual violence from an intimate partner, the Channels of Hope approach is improving gender equality and reducing violence against women and girls.”

Fred Sikini, from the Sun Valley community in the Solomon Islands, will be at the meeting to share his experience of how his life changed after attending the Channels of Hope workshop. Fred said his beliefs and attitude toward his role in the home changed and as well as his behavior towards his wife.

“I am nervous but excited about the trip and I am looking forward to sharing my experience to the world on the impact of Channels of Hope in my life,” he said.

Through the gender project, World Vision is now also working with the Royal Solomon Islands Police Force to educate and change attitudes of police officers who may be called in to respond to domestic violence incidents. It is hoped that by offering training to members of the police force, victims of violence will be more likely to seek the support of authorities and report the crimes that have been committed against them.

Ms Sade said World Vision was keen to share the Channels of Hope approach with the UN and other agencies in the hope of reducing gender based violence worldwide.

World Vision’s presentation at CSW is cosponsored by the UN Population Fund, the Australian Government and the Solomon Islands Government.