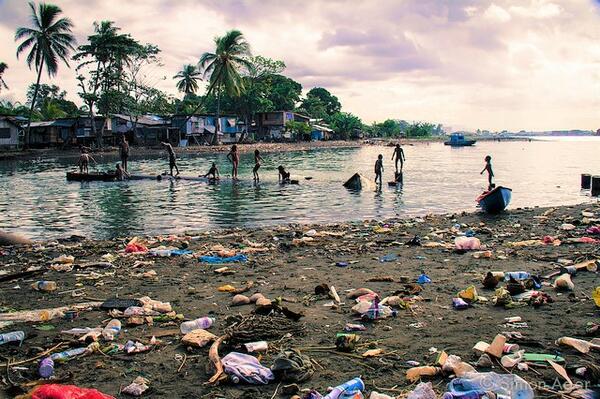 The Lord Howe settlement is said to be one of the highest priority hotspot areas targeted by HURCAP as it is located at the river mouth of the Mataniko river and lies 0.5 metres below the current high-water mark.
Source: Flickr: Simon Ager
By Georgina Kekea
Share
Thursday, 11 February 2021 08:50 AM

Honiara is a city at risk of natural hazards such as earthquakes, tsunamis, and tropical cyclones due to its location. In more recent times, rapid urbanization is stretching the city’s ability to accommodate the increase of rural-urban migrants moving to Honiara.

Heavily polluted internal drainage systems, overpopulated high density housing, lack of basic sanitation, limited road access, no formal connection to utilities and services, severe pollution along riverine valley, proximity to sewage outfalls with limited waste treatment capabilities are but some of the additional hazards caused by the influx of people into the city.

A program called the Honiara Urban Resilience and Climate Action Plan (HURCAP) has been developed to find solutions.

The Lord Howe settlement is said to be one of the highest priority hotspot areas targeted by HURCAP as it is located at the river mouth of the Mataniko river and lies 0.5 metres below the current high-water mark. The community faces additional hazards because of its proximity to sewage outfalls from the National Referral Hospital (which has limited waste treatment capabilities).

The Fishing Village settlement faces similar problems, aside from poor drainage which results in the accumulation of rubbish and waste in and around the area, the neighbouring sewage outfall is a health hazard.

In the Aekafo area there is limited road access and no formal connection to utilities and services, resulting in severe pollution along the riverine valley and significant risk from disease due to a lack of basic sanitation.

A large portion of the area is also potentially at risk of landslip, with houses built without formal approval or under Temporary Occupation License. This is common practice across much of the city’s informal settlement zones, resulting in variable structural quality and little to no government regulation.

In addition to the three hotspot communities are the Whiteriver area along Ngossi ward and Mamulele and Kobito along the Panatina ward southern boundary.

These areas are said to have very low metered water and electricity access, high levels of makeshift or traditional housing materials, and a housing density above 75 persons per hectare. These housing areas are also rapidly encroaching on the catchment areas around the Kombito water source, with the adjacent boreholes and spring water site.

The Action Plan says being aware of current day vulnerabilities to shocks and stresses, and possible climate-related risks in the future, are vital first steps in formulating adaptation responses and implementing actions that will enhance community resilience.

Currently consultations are being held at the Wind Valley area in West Honiara.

The Action Plan says as the country look to the future, climate change will increase the impact of more intense extreme events or longer term stresses such as sea level rise, a reduction in the quantity and quality of the city’s drinking water supply, or ocean acidification which damages local ecosystems and reduces access to food for consumption or sale.

The report says promoting an effective urban resilience strategy for Honiara will require a regular assessment of related activity.

“It is therefore also recommended that an annual monitoring report on processes and outcomes is produced and disseminated to all partners and interested parties, with opportunities for feedback and suggestions for improvements.

"As is common practice, an evaluation of the implementation of HURCAP after a five year period will also be needed to gauge effectiveness and efficiency against the objectives and actions that have been set out in this first urban resilience and climate adaptation action plan for the city”.

The multi-partner approach to resilience building for the city is led and coordinated by the Honiara City Council, Ministry of Lands, Housing and Survey, and the Ministry of Environment, Climate Change, Disaster Management and Meteorology. Research for the HURCAP was carried out by the RMIT with support from UN Habitat.