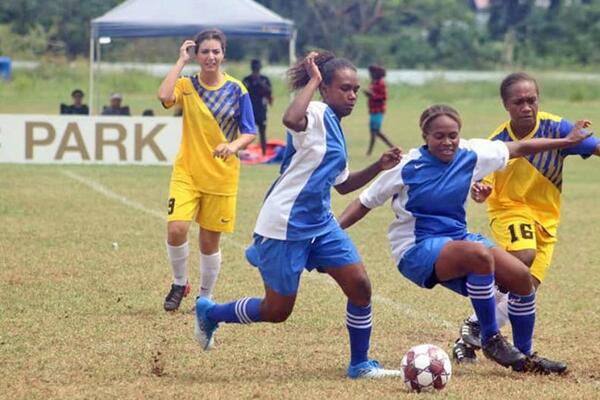 Koloale FC defeated a well-drilled Frigates United side 2-0 to kickoff of the much anticipated 2020 Solrais Women’s Premier League at the DC Park Oval on Saturday 15 August 2020.

Both teams came out firing in the opening 10 minutes of the match, having equal shares of ball possession.

Fresh from their successful pre-season run, Koloale had most of the early chances but could not find the right finishing.

Frigates United thought they had the breakthrough in the 30th minute when striker Jemina David was brought down in the 18 yard box after a quick counter-attack – however, failed to convert from the spot.

Both teams headed into the breather with the scores tied at nill all.

Koloale’s experience than came to show in the second half when national midfielder Ilene Pegi scored a clever chip goal to put Koloale in front after plenty of wasteful chances.

Veteran forward Cristal Annie Bakolo, than added the second with a cool finish to secure all three points for her side.

“The first game is always the toughest because you’ll never know how the other teams play, so I think that it is very important that we stick to our game plan instead of playing according to theirs,” said Koloale’s Cristal Bakolo.

Bakolo also said that this is the first time women’s football has huge support from Solrais Company and it will help prepare the players for the 2023 Pacific Games which will be held in the country.