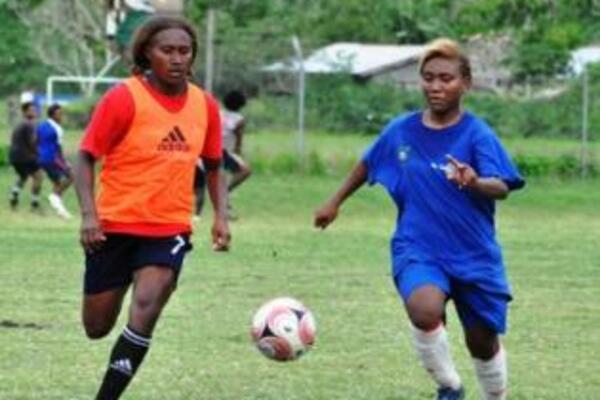 The Solomon Islands senior national women's football team have rebuilt their confidence with a 2 - 0 win against the Honiara Select side at the SIFF Academy field yesterday.

In their last friendly match against the same opponents their performance was not up to expectations and they could only manage a 0 - 0 draw.

The first half of the match started poorly for the national representatives and Honiara Select looked like it was going to cause an upset. Again their defensive frailties were exposed by a rampaging Honiara Select forward pack led by women's U-17 player Joy Timo.

Nevertheless, the national team was able to threaten their opponents occasionally and almost scored twice before halftime.

Their first chance came from an Ella Misibini cross that Ileen Pegi headed straight into the hands of Honiara Select goalkeeper, Gladys Bako.

This was followed by Crystal Bwakolo's attempt after a quick pass from Veronica Tolivaka on the right. Unfortunately, Bwakolo's shot just inched above the cross bar.
A change in the national team's strategy in the second half quickly paid dividends for them. Rather than try to break into the Honiara Select 18 yard box the forwards were encouraged to shoot from outside.

This resulted in their first goal which came from Bwakolo from just over the halfway mark. Her shot was mistimed by Bako and the ball slipped past her hands and into the net.

One nil in front the national team players had received the morale boost that they needed and continued to apply pressure on Honiara Select for more goals.

Despite having 3 good chances after their first goal they had to wait until three-quarter way through the second half before they could add to their score line.

Honiara goalie Bako, was substituted by women's U-17 goalkeeper Sylvester Maenu and the national team made use of the change to score their second.

After winning the ball back in midfield a quick pass put Betty Maenu'u with enough space to shoot and the low skidding ball went past Maenu who could have saved if she had dived for the ball.

The national team had several more chances to score in the last minute but the downpour late in the match affected their combinations up front and they finished the game unsatisfied with only 2 goals past their opponents.

Head Coach Timothy Inifiri congratulated his players for their performance saying that their hard work in training is paying off.

They will play 2 more friendly matches before they depart for Auckland, New Zealand on the 26th of this month.

"Our objective in our next friendly match is to score more goals as this is where we are lacking at this stage," Inifiri said.