Women’s Leadership Workshop Brings Together Outstanding Women from the Provinces 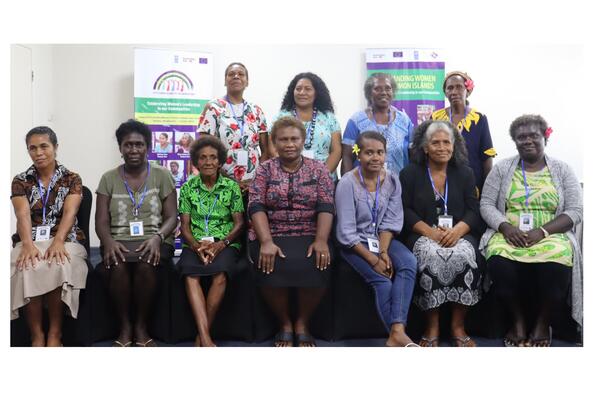 This initiative has identified 120 women throughout Solomon Islands. This was followed by an election in each of the provinces and in Honiara city which has resulted in the election of 11 Outstanding Women.
Source: Supplied
Share
Wednesday, 30 September 2020 09:19 AM

Women empowerment remains more vital as Covid-19 is impacting societies and vulnerable people at their very core, deepening the pre-existing inequalities including gender.

The United Nations Development Programme (UNDP) through its Strengthening the Electoral Cycle in the Solomon Islands Project (SECSIP) is organizing a four-day women’s leadership workshop under its Outstanding Women’s initiative.

In 2019 SECSIP launched the ‘Outstanding Women’ (OW) initiative as part of the project action plan in support of women leadership and gender sensitisation in Solomon Islands. The aim has been to draw out women who are valued and respected in their communities.

This initiative has identified 120 women throughout Solomon Islands. This was followed by an election in each of the provinces and in Honiara city which has resulted in the election of 11 Outstanding Women.

These 11 Outstanding Women together with the Presidents of the Provincial Council of Women and YWCA representatives are in Honiara to participate in the workshop to assess their profiles and identify future leadership opportunities.

In his address at the opening of the workshop, UNDP Country Manager Berdi Berdiyev said women empowerment and leadership are critical for effective governance and are central to Sustainable Development.

Mr. Berdiyev further re-emphasized the work of UNDP to eliminate inequalities and empower women through targeted, gender-focused programmes, by supporting initiatives that accelerate structural transformations and by working to ensure that all development efforts take into account the experiences, needs and contributions of women and girls.

“There is significant evidence that having women and girls as full participants leads to better decision-making that improves the quality of life for all.” Third Secretary Political from the Australian High Commission Laura Wilson said Australia was pleased to support the Outstanding Women initiative, an early election cycle activity aimed at highlighting the impressive Solomon Islands women leaders in the community.

“Australia is strongly committed to promoting the empowerment of women and girls, including in Solomon Islands. Australia is the largest donor of SECSIP and recently agreed to extend its support to June 2021.”

Solomon Islands Electoral Commission’s Chief Electoral Officer Jane Waetara said in her keynote address said women’s leadership attributes too often remain silent in communities and at home and little is known about how they impacted the communities and change people’s life.

“Women leadership including the various contributions made to the development of this nation, have been very much alive and vibrant in rural Solomon Islands, but need concerted effort to continue to recognize and celebrate,” Mrs Waetara said.

She acknowledged development partners for their continued support and urged everyone to build the initiative to connect leadership values in communities in order to build confidence on women leadership capabilities at all levels.

A theme song for the OW’s initiative was also launched at the opening of the workshop. SECSIP has received funding from the Government of Australia, European Union and UNDP.