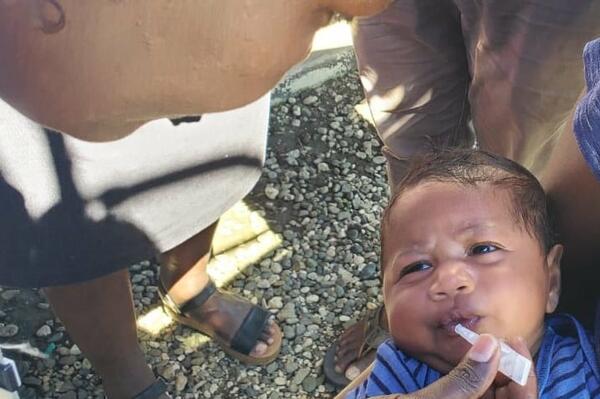 The first symptoms generally appear 7 to 10 days after infection. They include a mild fever, runny nose and cough, which in typical cases gradually develops into a hacking cough followed by whooping (hence the common name of whooping cough).
Source: File: MHMS
By Georgina Kekea
Share
Thursday, 09 September 2021 08:58 AM

The government is urging families to vaccinate their babies against illnesses such as whooping cough or pertussis.

With the report of an outbreak of pertussis, Dr. Yogesh Choudary from the Ministry of Health and Medical Services (MHMS) says it is important that families bring their babies for their usual check-ups.

Dr. Choudary however says it is very important that families must bring their ‘pikinini’ to the clinics for ‘nila’.

He says guidelines have been distributed to the reported clinics and that medicines were also sent to the clinics for treatment of patients.

At the same time, Dr. Choudary says the effectiveness of the vaccine will lessen as the child grows older.

However, he says in Solomon Islands, children from the ages of six were not given boosters to build their immunity against whooping cough.

“It will be up to the health’s technical experts to bring this discussion forward”, Dr. Choudary says.

WHO recommends that a booster dose is preferable during the second year of life of a child. Based on local epidemiology, further booster doses may be warranted later in life.

WHO says vaccination of pregnant women is also effective in preventing disease in infants too young to be vaccinated.

In 2018 WHO reported that there were more than 151,000 cases of pertussis (whooping cough) globally.

Pertussis spreads easily from person to person mainly through droplets produced by coughing or sneezing. The disease is most dangerous in infants, and is a significant cause of disease and death in this age group.

The first symptoms generally appear 7 to 10 days after infection. They include a mild fever, runny nose and cough, which in typical cases gradually develops into a hacking cough followed by whooping (hence the common name of whooping cough).

WHO says people with pertussis are most contagious up to about 3 weeks after the cough begins, and many children who contract the infection have coughing spells that last 4 to 8 weeks.