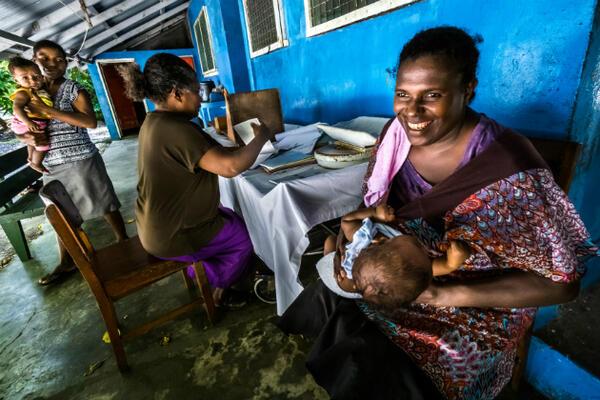 Judith Olivia had to travel from the remote village of Malatoha to the National Referral Hospital in the capital, Honiara.
Source: WHO
Share
Thursday, 23 March 2017 09:16 AM

That’s the journey Judith Olivia has made to deliver each of her children, from the remote village of Malatoha in the Solomon Islands to the National Referral Hospital in the capital, Honiara.The closest health clinic to Malatoha is six hours’ walk away, in the town of Belaha, but Ms Olivia says she feels safer in the hands of doctors in Honiara.

"If there was a doctor at Belaha clinic, I would go there to have my children," she says. "It's much easier for me to go there, but right now I’m not confident that the health workers can take care of me."

About 30% of all births in the Solomon Islands happen at the National Referral Hospital, even though the capital accounts for just 13% of the sprawling archipelago’s population. Of the nation’s 157 doctors, 126 are based here.

In a nation of only 620 000 people dispersed over more than 600 islands, Ms Olivia is one of the lucky ones. She at least lives on the same island as the hospital. Other women, and patients of all kinds, travel for days by truck and boat from distant islands to receive medical care that could and should be delivered closer to home.

"Even though it's really far for some of them to travel to Honiara, they will do it because they can't see a doctor at their clinics," says Elizabeth Sanau, Clinical Nurse Consultant at the National Referral Hospital's emergency department.

All that is about to change.

A bold new plan developed by the Ministry of Health and Medical Services, with support from WHO, sets out the Pacific nation's roadmap towards universal health coverage and the Sustainable Development Goals. The plan defines what services are to be offered at each of the 4 levels of the health system, from small rural health clinics offering basic primary care to area health clinics with simple surgical services, provincial hospitals, and the National Referral Hospital.

Developing the plan has involved not only the Ministry of Health, but also the Public Services Ministry, which deals with labour issues, as well as the Ministry of Infrastructure Development.

"WHO is excited to be part of this whole new reform agenda that the health ministry has embarked on which could be a game changer," said Dr Sevil Huseynova, the WHO Representative to the Solomon Islands.

Almost half of all health expenditure in the Solomon Islands comes from donors. But much of that funding has targeted specific diseases, rather than strengthening the country’s health system and improving overall services. In addition, well-meaning local politicians and churches have built hospitals with little or no coordination with the Ministry of Health, and then seek the ministry’s support to run them.

The result: Fragmented services, and health gains that haven’t matched the levels of investment.

"With all the increased investments in the recent past, there have not been proportionately significant health gains," says Dr Tenneth Dalipanda, the Solomon Islands' Permanent Secretary for Ministry of Health and Medical Services. "For the last so many years measles immunization coverage has hovered around 75%, and we’ve never been able to get past the 85% mark despite increased investments. That’s what convinced us that something must be done differently."

The plan, called the Role Delineation Policy, also maps out the human resources, infrastructure, and equipment that will be needed at every level.

"The health ministry is undergoing reforms which will enable us to implement the new policy," Dr Tenneth said. "The provinces need to take control of delivering health services while the central ministry will deal with policy, resourcing, and governance."

Under the plan, 9 provincial hospitals and 34 area health centres will be upgraded, while 202 nurse aid posts will either be closed or upgraded to become rural health centres to ensure resources are used most efficiently to provide health services at strategic locations.

The plan also includes staffing area health centres – previously run by nurses – with doctors, ensuring that the health services people need are available closer to where they live.

To meet that demand, almost 100 medical graduates are being trained in Cuba, about half of whom have already returned to the Solomon Islands.

The plan will be begin implementation after it is finalized in June this year. But some changes are already happening. Infrastructure upgrades have begun, and lists of equipment and the human resources needed have been drawn up.

Of course, all of that will cost money.

A grant from the Republic of Korea to improve infrastructure in one province will help to determine how much investment will be needed to implement the full plan across the archipelago.

If successful, the plan may become a blueprint for some of the Solomon Islands' Pacific neighbours, says Dr Greg Jilini, an Under-Secretary to the Ministry of Health who leads the taskforce that drew up the plan.

"There are other countries interested to see what we are doing, like Vanuatu who have very similar problems," he said. "They’re very interested to take the same path."

WHO is helping other countries and regions learn from the Solomon Islands' example. A website launched last year on "integrated people-centred care" provides resources and real-life examples of people-centred health service reform.

The website allows ministries of health, health-care providers, policy-makers and other interested parties to access the latest knowledge on integrated people-centred health services and to build a global network of people who work towards the same goal – and ensuring that people like Judith Olivia can have their babies closer to home.

Thankfully, both mother and baby are doing well. "After six children, I can give birth very quickly!" she laughs. Soon Ms Olivia and her husband will travel back to their village in the hills to introduce their five older children to the newest member of the family.