WHO and UNICEF Continue Emergency Response Efforts in Makira Province 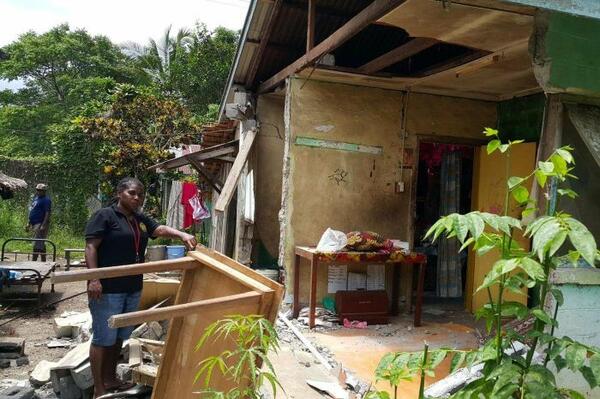 WHO and UNICEF are partnering with local civil society and the provincial government to deliver health and education supplies to those affected by the 7.8 magnitude December earthquake in Makira province.

A second shipment of emergency supplies which included an additional 10 tents and 35 tarpaulins are used by health centres and schools.

As part of the monitoring visit they met with Premier Stanley Siapu and provincial executives to reiterate WHO and UNICEF’s commitment in supporting the response efforts in Makira.

Premier of Makira province, Honourable Siapu thanked WHO and UNICEF for the assistance received soon after the disaster happened and their continued support for the people of Makira.

“Our visit is to sympathise with the people of Makira province and also to work closely with your provincial officers to validate and finalise health response plans. The provincial teams have the best understanding and knowledge of their own province and how to effectively implement such a plan, so we are here to support them,” said Dr. Huseynova.

She also highlighted that in spite of the earthquake there are opportunities to improve health infrastructure and services across the affected areas in Makira through the response plans.

UNICEF Solomon Islands Chief of Field Office, Mr. Yun Jong Kang shared similar sentiments and assured the people of UNICEF’s support. “UNICEF is committed to support the response efforts with collapsible containers and buckets for carrying water, tents and tarpaulins for temporary shelters for students and teachers including health clinics and soaps for hand washing,” he said.

“We will continue to provide supplies to those affected and ensure that children remain healthy and their education is not disrupted, in spite of the damages that the earthquake had caused to the school infrastructure,” explained Mr. Kang.

Five tents are being used on the weather coast of Makira as temporary clinics and homes for medical staff. While the rest of the tents and tarpaulins went to affected schools.

Makira provincial government and the Solomon Islands Red Cross volunteers assisted with the delivery of supplies to clinics and schools.

Press Release: UNICEF and WHO