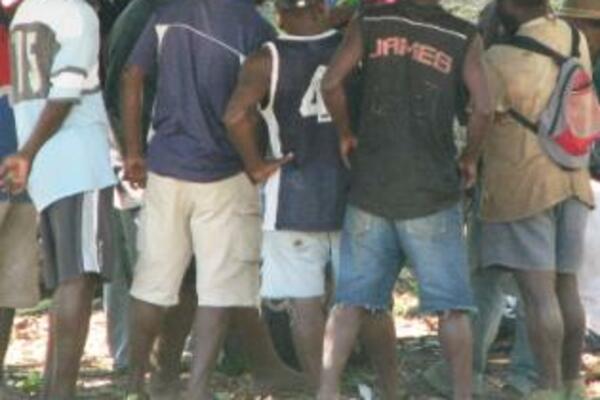 Vendors are now asking themselves, where to from here?
Source: STO Archives
Share
Tuesday, 27 October 2009 09:32 AM

Law enforcement officers of the Honiara City Council have demolished betel-nut markets of White River and Rove yesterday afternoon following the expiry of the deadline set by the Council to remove the market stalls.

Up to thirty law enforcement officers tore down the stalls made of timber cut-offs, plastic and sago leaf roofing using sledgehammers and other tools.

An excavator was also used to break down some of the bigger stalls.

As law enforcement officers closed in on the stalls, market vendors hurried to put their belongings to safety near the sea line of the market.

Women and children carried thermoses, lanterns, solar panels, dry battery packs, including suitcases of clothes while the men sorted out timber and plastics floored by the law enforcement officers.

One market vendor Matilda Ngaingera, also a student at the College of Higher Education, says it was a very sad moment for her and the many others who used the market to sell betel nut for much needed income for their families.

Mrs. Ngaingera says many of them are either students or unemployed parents who sell betel nut to put their children in school.

Vendors are now asking the City Council as to what they have planned for them. "For many of us this is our only means for survival, and now they have taken that away from us," said one vendor. "What are we going to do now?"

The City Council said that the operation was necessary given the rise in crime and the selling of illegal substances by some of these vendors.