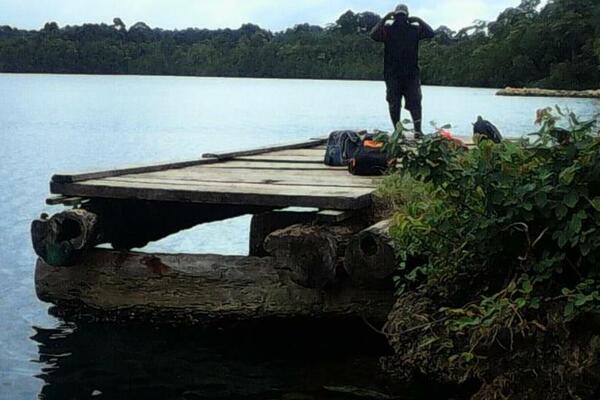 After demolishing the current wharf(above) larger vessels will be able to dock safely at the upgraded wharf site, allowing more convenient and economical movement of passengers and cargo, and thereby improving quality of life in Kolombangara.
Source: Asian Development Bank
Share
Wednesday, 19 February 2014 07:41 AM

Work has begun to upgrade and rehabilitate the Ringgi Wharf on Kolombangara Island in Western Province, Solomon Islands.

The wharf is one of four wharves to be improved under the Domestic Maritime Support Project which is financed by the Solomon Islands Government, the Asian Development Bank (ADB), the Australian Government, and the New Zealand Aid Programme.

The project is constructing and rehabilitating rural wharves and jetties to improve safety and accessibility for economic and social activities. The project is also assisting the government in upgrading maritime infrastructure to make it less vulnerable to climate change and natural hazards.

The upgrading of Ringgi Wharf begins in February and will involve demolishing and clearing the existing timber wharf and the installation of a larger, reinforced concrete wharf.

For the first time, larger vessels will be able to dock safely at the upgraded wharf site, allowing more convenient and economical movement of passengers and cargo, and thereby improving quality of life in Kolombangara.

The new wharf at Ringgi will boost connectivity between Western Province and the rest of Solomon Islands, providing better access to medical facilities, educational facilities, and markets.

The construction of new wharves at Keru and Ngasini in Western Province, and Tatamba on Isabel Province, as well as a landing ramp at Uhu in Malaita Province, are planned for later in 2014 under the project.

ADB, based in Manila, is dedicated to reducing poverty in Asia and the Pacific through inclusive economic growth, environmentally sustainable growth and regional integration. Established in 1966, it is owned by 67 members – 48 from the region.