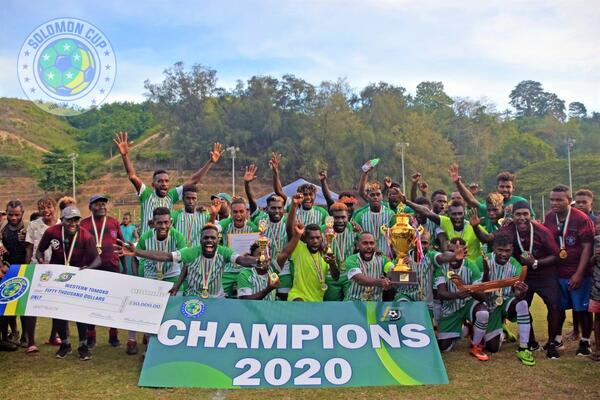 Geso Kituru finished off a Sipakana pass for the winning goal in the second half. The game ended 1-0 in favor of the gallant Tomoko lads.
Source: SIFF
By Jimmy Nolan
Share
Monday, 14 December 2020 08:37 AM

Western Tomoko has won the coveted Solomon Cup, and in doing so created history for the Western Province, their first since the inception of the Solomon Cup.

The victorious Western Tomoko team sailed home over the weekend, with celebrations at every port as they journeyed to the provincial capital of the Western Province, Gizo.

Celebrations lasted throughout the weekend, with many crediting the team for their discipline, dedication, and commitment, bringing the cup to the Western province for the first time.

But it was a nervous 90 minutes of football for the fans. The Western Tomoko had to work hard, with much of the early possession with the Malaita Eagles.

Malaita Eagles coach Terry Oiaka said that despite dominating possession it was unfortunate not to score when they had their chances.

“It was a good game, Western Tomoko had their chances and scored, and we did not, that’s the difference.

“That’s football if you have the chance but you don’t score and the other team scores their chances, then they win,” he said.

Geso Kituru finished off a Sipakana pass for the winning goal in the second half. The game ended 1-0 in favor of the gallant Tomoko lads.

Tomoko coach Seri Hite is happy to be part of Western Province football history and at the same time congratulated Malaita Eagles for a well-played game.

“First I would like to thank the Almighty for today’s victory.

“I would like to thank Malaita Eagles for a great game, actually they were the better side, and you can see by their performance, they did an excellent job.

“It was just fortunate that we score in one of the very few chances we had."

Consolation prizes were awarded to Junior Zimri of Malaita Eagles for the Player of the Tournament, Tomoko’s goalkeeper for the Golden Glove award, and Sipakana for the golden boot award.