Western Premier Urges JBC to Focus on Reconciliation and Reparation 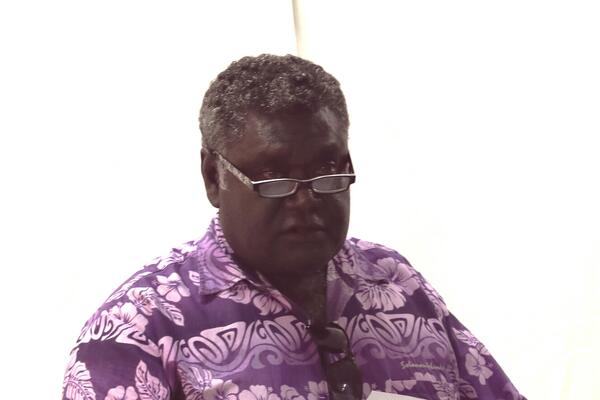 The Premier of Western Province Hon. David Gina has called on the Solomon Islands-PNG Joint Border Committee (JBC) to prioritize reconciliation and reparation for border residents before any border management plans can meaningfully implemented.

Premier Gina who was Chief Guest made the call at the start of the 8th Joint Border Committee meeting in Gizo which formally began in Gizo, Western Province yesterday.

More than 40 officials from security agencies from both Solomon Islands and PNG are gathering in Gizo this week to review and discuss further improvements to existing agreements and arrangements relating to border management between the two countries.

Premier Gina said the JBC is a bi-annual event that has now reached its 8th gathering in Gizo this week but previous resolutions or outcomes were only made at the diplomatic or official level which makes his people wonder whether the implementation resolutions would take effect due to the marginalization of other key stakeholders.

"This is because the provincial governments’ concerned, respective chiefs and other key stakeholders were not parties to these discussions,” he said.

Mr. Gina said one of key requirements that would pave the way for successful implementation of any national border management strategy is “reparation” and “reconciliation” between parties affected by the spillover effects of the past Bougainville Crisis and other recent incidents.

“There has to be meaningful reconciliation and genuine intent from all parties as the basis for driving any joint border management initiative going forward. This must involve all stakeholders on the ground,” he said.

He also recommended that key government agencies like immigration, customs, biosecurity and police must be beefed up at Korovou in the Shortland Islands in order to effectively implement and administer relevant policies, processes and other related border management initiatives.

“We will be shouting in the wilderness if we do not address these two critical issues as I believe these are fundamental to the provision of any lasting solution to border management,” Premier Gina said.

This week’s meeting involves joint reviews and discussions on the outcome of the 7th JBC in Kokopo, PNG, which will include reports by the Joint Technical Working Group, Updates on Border developments, Updates on the status of Bilateral and Border Treaties and Arrangements between Solomon Islands and PNG.

These Border Treaties included the Basic Agreement on Border Arrangements between SI and PNG, The Treaty on Sovereignty, Maritime and Seabed boundaries, Agreement Concerning the Administration of Special Areas and the Review of the Memorandum of Understanding on Joint Border Surveillance and Administration.

The meeting will also include updates on the Bougainville Referendum, updates on National Reconciliation and other relevant issues regarding the SI-PNG border.

More than forty senior and technical officials from the two Governments are currently in Gizo for the JBC meeting. The Solomon Islands delegation consists of Officials from the Ministry of Foreign Affairs and External Trade (MFAET), the Ministry of Police, National Security and Correctional Services, the Office of the Prime Minister and Cabinet, the Maritime Department, Customs, Immigration, Biosecurity, the Culture Division and other support staff.