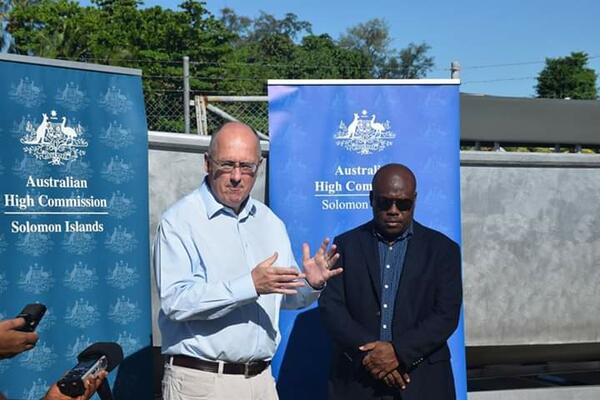 The capability of the Royal Solomon Island Police Force (RSIPF) in the Western border region will be boosted after receiving a second high speed craft donated by the Government of Australia through the Australian High Commission Office in Honiara today.

High Commissioner Strahan said Australia was pleased to be enabling the RSIPF to become more effective and nimble. He noted that the second vessel was larger, faster and equipped with more advanced radar.

“This second vessel will extend RSIPF’s vital work patrolling the country’s maritime borders. These patrols have become even more important as Solomon Islands steps up its efforts to prevent a COVID-19 outbreak,” he said.

“These boats are a demonstration of Australia’s commitment to helping Solomon Islands manage its borders. Work is well underway to construct a new permanent Border and Patrol outpost in the Shortland Islands. The Australian Defence Force is taking forward the design of the post, which was announced by Prime Minister Sogavare and Prime Minister Morrison in September last year. This is testament to our close security partnership and of the close friendship between our two countries.

“Australia and Solomon Islands are fully committed to ensuring our shared region remains peaceful and stable.”

At the ceremony, the Honourable Anthony Veke on behalf of the government thanked Australia for its continuing support to security agencies in the county.

“Our security environment at our borders is often very challenging for our police officers and other law enforcement agencies to effectively manage, due to our very limited mobility resources available to them. Critical patrolling duties along the Solomon Islands western border with PNG becomes very crucial now after the Government’s declaration of the Western Border as an Emergency Zone under our current State of Public Emergency,” he said.

“The kind gifting of this second fast speed vessel from the Australian Government is timely and welcomed for the RSIPF as it will contribute a long way, to further enhance their important policing duties and operations along with other law enforcement agencies at the Western Border.”

In receiving the boat, Acting Police Commissioner Mostyn Mangau said the gift was very timely as the RSIPF steps up its presence in the Western Province.

“Today marks another important milestone in the history of the RSIPF and its journey of growth and capability development.

“On behalf of the RSIPF, I wish to thank the Government of Australia through the Australian High Commission in Honiara for this gift of the high speed patrol vessel which could not have come at a more appropriate time as Solomon Islands continues to fight to prevent the coronavirus from entering our borders. This is the second such vessel gifted to RSIPF. The first one has already been deployed to the Western border.”

Acting Commissioner Mangau explains: “With the Government’s declaration of the Western border with Papua New Guinea as an Emergency Zone under the current State of Public Emergency, the RSIPF as the country’s leading law enforcement agency, has the task of ensuring that no small craft vessels will go out or come in through the Western Common border region with PNG.”

“This high speed patrol vessel will greatly boost the mobility of RSIPF and that of other government officers between the islands in that region to ensure small craft vessels do not break the Order and our people in that region are safe and secure from the coronavirus.”

In the RSIPF strategic direction, the Force will improve its operational capabilities to support border monitoring, surveillance and reconnaissance at its maritime borders. Such a gift as this high speed patrol vessel will be utilised in areas such as:

“The RSIPF is proud to receive this craft and is thankful to the Australian Government for their support towards our maritime capability. This new speed craft will certainly boost the country’s maritime capabilities. I urge all the RSIPF officers that will use this expensive asset to look after it and use it for what it is meant for,” Acting Commissioner Mangau emphasises.