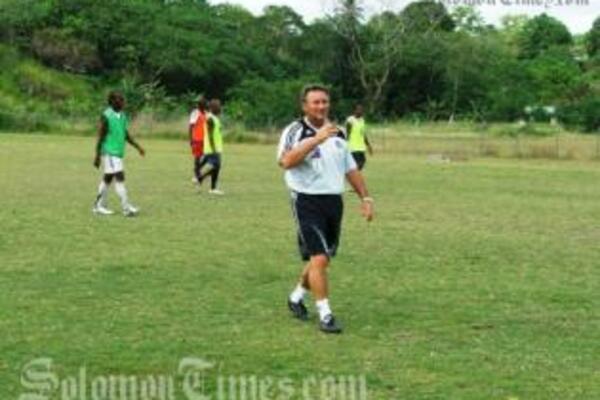 Forty-nine affiliate coaches of the Solomon Islands Football Federation (SIFF) attended the five day program which was divided into 3 segments:

Barnabas Loloito, a local women's coach who attended the workshop, said that his understanding of the roles and responsibilities of coaching women footballers has been greatly enhanced by the workshop. Mr. Loloito said that some of the coaching techniques that were taught are new and will be very effective on the field for both male and female players. Loloito added that more programs of this nature should be run for women's coaches in Solomon Islands.

The second component of the course was attended by 22 senior coaches active in the Honiara Football Association DJ League Premier Division. The participants were taught about their roles as high performance coaches and also on developing training schedules for competitions. The High Performance Coaches Workshop also covered session planning, fitness testing and performance analysis areas which have become all too important since the start of the O-League championship in Oceania.

A new introduction to the local coach education scenario was the SIFF Potential Instructors Workshop which was held on Saturday. According to Jim Selby, the aim, eventually, is for Member Associations of OFC to have local coaching instructors. "This will enable Member Associations to have local experts who will develop coach education courses that best fit their conditions and resources," Selby said. The introductory Potential Instructors workshop should pave the way for a Coaching Instructor's course for SIFF coaches in the coming year.

The SIFF Development Officer, Noel Wagapu, said that these workshops are very important for local coaches.

"They have added to their knowledge base some modern techniques for coaching and this will be a big benefit for our local clubs and players," Wagapu said.

"These coaching workshops will come in handy for the participants as the 2009/10 football season in Honiara gets underway. Both the men's and women's coaches will have the opportunity to test their newly found knowledge as soon as they return to training with their clubs this week."