Week Begins with a Blast 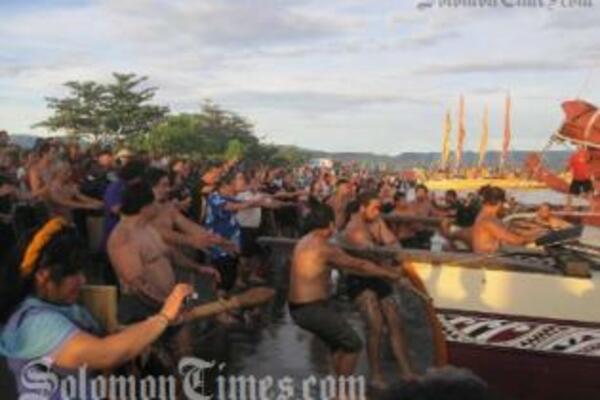 The New Zealand delegation pulls their Vaka ashore as the crowd looks on.
Source: STO
Share
Monday, 02 July 2012 11:05 AM

At about 3am this morning, Honiara woke up to the sounds of fireworks to welcome the arrival of the Regional "Vakas" from the region and the Tomokos (war canoes) from the Western Province.

By 4am, traffic had already began along Ranadi highway, while the A.E Oval beachfront in Ranadi was already jam packed with all the delegation from the Region and the Honiara citizens alike. Adults and children alike lined the beachfront in great excitement of the morning show. The morning began with a massive show of fireworks to the "ohhs and ahhs" of the crowd and was then followed by presentation of gifts by the Festival Committee to the heads of each delegation.

With formalities over, the Tomokos began the show by storming the beach to challenge the different Pacific Island and the Solomon Island warriors waiting on the beach.

This was then followed by the arrival of the Regional Vakas to the traditional welcome of each of their countries. Samoa, New Zealand and Fiji were amongst the Pacific countries who put on a great show in welcoming their Vakas by doing the haka and their traditional dances.

"This is by far the best Festival of Pacific Arts we've been to and it is such a great opportunity to experience and see the different cultures showcased. The Festival village is jaw-dropping and we just can't wait to perform on the massive stage," said a member of the Fiji delegation.

With the welcome for the Vakas over this morning, the whole of Honiara are now looking forward to the Official Opening at the Lawson Tama stadium this afternoon at 4pm.