We Need to Broaden Our Economic Base: Anga 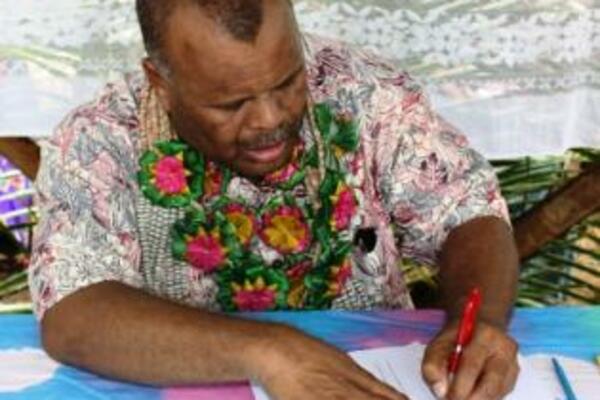 Mr Anga said there is a great need "to broaden our economic base to address the country's growing population."
Source: Photo Supplied
Share
Tuesday, 08 June 2010 11:23 AM

Permanent Secretary of the Minister of Commerce, Industries, Employment and Immigration, Barnabas Anga has highlighted the need for Solomon Islands to broaden its development base.

Speaking last Friday during the signing of a Memorandum of Understating between Kwana'ai landowners in the Suava Bay, North Malaita, the national government and Malaita Provincial government, Mr Anga said there is a great need "to broaden our economic base to address the country's growing population."

Mr Anga said he believes that the Economic Growth Centre would be the starting point of exchange or trade and the first step to development in the northern region of Malaita.

"We need to build a growth center to help as reach markets. May be our market in Honiara, or Auki or abroad. But the starting point of exchange or trade is the growth center which is why we are here today."

Meanwhile, the Vice Chairman of the Kwana'ai tribe Board of Trustee, Reverend Silas Erekali has said the signing of the MOU, was a historic occasion which marks a milestone in community development in the Suava Bay.

He said after years of negotiations and consultations between the national government, the Malaita Provincial government and the Kwana'ai tribe, the occasion brings the parties much closer towards the goals which they aimed for.

Reverend Erekali said that goal is the setting up of an Economic Growth Centrex in Suava Bay.

He said the signing of the MOU affirms the suitability of the area in which the planned infrastructure will be established.

Reverend Erekali said the efforts by the central government, the Malaita province and the landowners have taken so far for the need to establish an economic Growth Centrex in Suava Bay is a dream of everyone, both in the communities within Lau-Mbaelelea and North Malaita constituencies.

He said the economic center once built, will be the dawn of a new day, for the Suava Bay communities, the Malaita province and the country and he urged all parties to the agreement to make it a reality.

"The signing of this MOU, states explicitly that the project is soon to start. It will be a slap to our faces if it is delayed for another year or more. Like other government half-finished projects around Malaita, we would never want to see the same mistake repeated here. We hope that the government and Malaita Province are serious with their plans for Suava Bay that they will start soon."