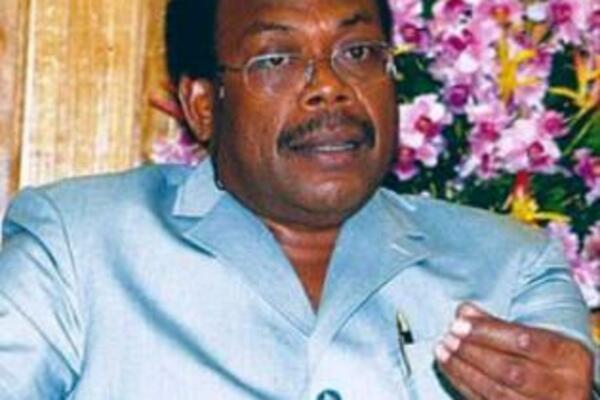 Prime Minister Sikua says salary details of all state workers are readily accessible in the Treasury Department if the newspaper desires to get the accurate details.
Source: STO Archives
Share
Friday, 04 September 2009 09:37 AM

Prime Minister, Dr Derek Sikua, has denied a story carried in the Solomon Star that claimed Government Ministers are amongst the highest paid people in Solomon Islands.

He says the claim by the newspaper that government Ministers were paid $360,000 dollars a month is "a blatant daylight mockery."

Dr Sikua said that the take-home pay for most Ministers is between three and four thousand dollars a fortnight.

He says that as a responsible Government that adheres to transparency and accountability, they have decided to release full details of his fortnight net pay and those of the Deputy Prime Minister, Ministers and Caucus Chairman.

Ministers and Caucus Chairman take-home pay each fortnight is between $3,500 dollars and $4,400 dollars.

He says there are other state workers whose salaries are far higher than politicians further stating that the Solomon Star and its source are hells-bent on trying to tarnish the good image and integrity of the Government and politicians.

Prime Minister Sikua says salary details of all state workers are readily accessible in the Treasury Department if the newspaper desires to get the accurate details.

However, sources familiar with payments made to Ministers of the Crown say that while it may be true that what was quoted in the papers was an exaggeration, the amount quoted by the Prime Minister is just their salary. "It does not include other allowances such as transport, education and the list goes on...if we were to factor that in then it is quite substantial...but certainly no where close to the amount quoted in the papers."