Water is Life, but so is Proper Sanitation 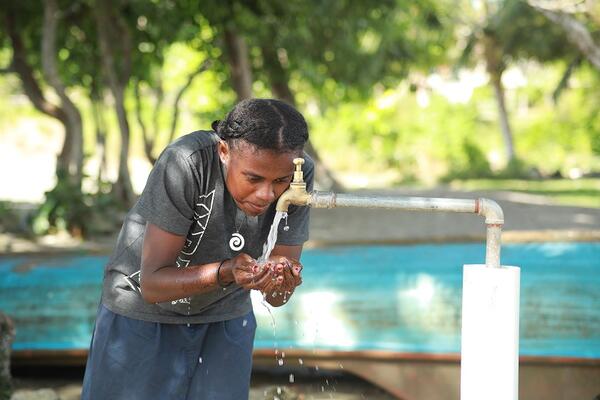 Kylie says that as a young village girl the water project has made a positive impact to her and those in the community.
Source: Sukwadi Media
By Georgina Kekea
Share
Thursday, 10 September 2020 09:37 AM

“The most common sickness in our area was diarrhea”, Martha Sura says.

Martha was born and raised in Balo. Today she is a happy woman despite the challenges she faced as a village mother.

A murky stream used to be the washing spot for the women of Balo on Guadalcanal.

Balo is a coastal village located in Aola Bay of East Central Guadalcanal. Over the years they have experienced coastal erosion of their beach.

“I saw my mother use the stream to wash, I grew up washing from the same stream, I do not want my grandchildren to continue with the same cycle”, Martha says.

Water supply and sanitation has been a major problem in Balo for many years. The history of the village dates back to 1947. It was after WWII, people fled from their village up in the hilltops to the current coastal site.

Over the years, the need for access to better water became critical as it also impacted the health of families where diarrhea, especially for small children, became an issue.

There were also some experiences with skin rashes, ringworms and sanitization issues especially with the open defecation resulting in pollution of the beach.

During high tides, the ‘hotspot’ stream will get flooded with salt water causing inconvenience to the women folks often tasked to wash their family’s kitchen wares as well as clothes from the stream.

Families also spent so much time finding and collecting water that children miss school at times and parents have less time for income generating activities.

“I have four children and five kukuas (grannies). I lost an adult daughter four years ago”, Martha says.

Despite being sad as she spoke of her grief, there is also hope for better days for her grandchildren.

“Our only wish now is to have support for sanitation facilities”, Martha says.

She says since the population has increased, the whole area is now filled with people and houses.

“Sometimes people just hide behind a small shrub to relieve themselves. This is not healthy and a hazard for the community”, Martha says.

Kylie Mbunia is another girl in the village. She used to attend Mboeni Community High School.

“I grew up with my grandparents here in Balo village”.

Kylie has since left school and now resides in the village.

She says as a young village girl, the support provided for her community has really made a positive impact in her life.

A bore hole consisting of two 5000 liters water tanks with 17 tap stands was installed in the village.

“In the morning we usually connect a hose to the nearest tap stand to refill our containers. The water stored will last us the whole day or even up until the next day. In that way, I do not have to walk far to fetch water as I had been doing in the past”, Kylie says.

She says she is lucky her family has an outside lavatory.

“In the morning we store water in the drums here to flash the toilet”, she says.

“I am lucky that I can also bathe in the privacy of a bathroom”, Kylie giggles.

The village of Bola was lucky to receive support under the Community Resilience to Climate and Disaster Risk Project (CRISP).

This initiative was supported by the National Government through the Ministry of Environment, Climate Change, Disaster Management and Meteorology (MECDM).