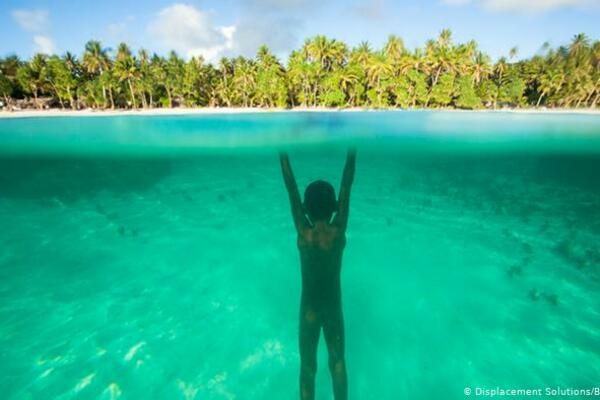 Solomon Islands experience sea level rise at an average of 8mm per year, well above global projections. The rise is a threat to communities living close to the coastline.
Source: Beni Knight / Displacement Solutions
By Georgina Kekea
Share
Thursday, 26 November 2020 09:35 AM

The government is being urged to redouble its efforts on climate change issues.

MP for East Are ‘are, Peter Kenilorea (Jnr) told parliament that the climate change issue is a grave threat to small island countries like Solomon Islands.

Kenilorea says more work needs to be done to ensure that these threats are mitigated.

“Our people are in the frontline - we keep on saying this in international forums, but actions speak louder than words when it comes to this particular issue. So, I would encourage the ministry, the good minister, to continue to redouble its efforts in this front”, Kenilorea says.

Solomon Islands experience sea level rise at an average of 8mm per year, well above global projections. The rise is a threat to communities living close to the coastline.

The MP for East Are ‘are 'also asked the Environment Minister on plans for the relocation of affected communities in Solomon Islands, especially by sea level rise, in places like Ontong Java, Lau, Walande and Langalanga.

In his response Minister Dickson Mua says a relocation advisory committee has been established between the ministry of environment and ministry of lands. He says other members of the committee include members from the provincial government ministry, prime minister’s office, church organizations, academia, and community representatives.

“It is important that this is done first to guide how the government addresses relocation for communities that need to be relocated or provided a second home”, Mua told parliament.

Meanwhile Opposition Leader, Mathew Wale says the government’s response is too slow as this is another disaster. He questioned if people affected by sea level rise can seek assistance from the government, pending work on a Climate Change Bill.

Mua however says this is not possible as guidelines must be in place first before they can start assisting communities.

Of the same, it is understood that the government will need to foot the bill on relocation by itself.

“Fund must come internally but that does not mean that we cannot seek assistance from an outside source”, Mua told parliament.

The provincial township of Choiseul was the first of the islands announcing relocation from sea level rise. Taro Island is less than two meters (6.6 feet) above sea level. The Island is exposed to storm surges and tsunamis caused by earthquakes, and is expected to worsen in the future by rising sea levels.

Since the announcement was made more than five years ago, the township is yet to relocate to the mainland.

Taro is not the only island in Solomon Islands compounded with sea level rise. The people of Lord Howe islands are also faced with the impact of climate change.

“It must also be understood that relocation is not an easy undertaking because of social, cultural, economic and personal choice and the considerations that come with it. And more importantly, land is a scarce resource. As such we need to take a well-considered approach guided by appropriate guidelines and supported by relevant laws”, Mua told parliament.