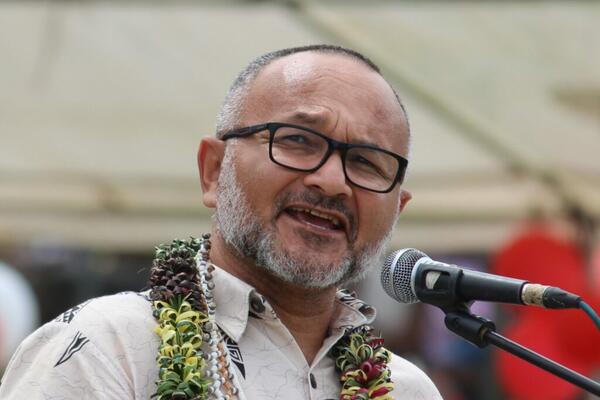 Hon. Wale calls on the Prime Minister to discipline his Ministers from this practice which causes political instability at the provincial government level unless it is his government’s policy to do this.
Source: Solomon Herald
Share
Friday, 19 March 2021 08:42 AM

“With the recent failed attempt to topple Premier Suidani, we now have a pending Motion of No Confidence looming against the Premier of Guadalcanal Province. Who knows what other province is lined up?

“Regrettably the common denominator in all these cases is, dissatisfaction by foreign interests with political decisions or positions taken by provincial governments. What is even more disconcerting is, national leaders are being used by these foreign loggers against our provincial governments. This is very bad leadership and these actions only serve to further undermine the trust and confidence our people have in their national leaders.

“Information on hand clearly suggest that the pending Motion of No Confidence against the Premier of Guadalcanal Hon. Francis Sade is directly connected to a recent decision taken not to issue a business license to SINO Capital in respect of the company’s logging operations in East Central Guadalcanal.

“Guadalcanal Province has the right under law to review and refuse grant of any business license to any investor found to be conducting business contrary to provincial ordinances and there are legal avenues for dealing with any grievance arising,” says Hon Wale.

However, the Opposition Leader points out that it seems in the case of Guadalcanal, the decision did not go down well with some of our national leaders who are plotting the removal of the provincial Premier and executive. This is a terrible situation, he says.

Hon. Wale calls on the Prime Minister to discipline his Ministers from this practice which causes political instability at the provincial government level unless it is his government’s policy to do this.

“Information from reliable sources suggest that the MP for East Guadalcanal is behind the motion against Premier Sade and his government and the intention is to bring into power a puppet one instead. This is akin to early attempts made against Premier Suidani. This is just not right.”

“This behavior raises questions on the integrity of the East Guadalcanal MP and others that continue to interfere with the administration of our provincial governments to further the interest of foreign loggers against the good interests of our people,” adds Hon. Wale.

Hon. Wale said, Premier Sade and his government are doing a great job in leading the province and ensuring that their finances, resources and peoples rights are safeguarded against dubious investors. He is cleaning up the Guadalcanal provincial financial management, after years of mismanagement by prior governments. He should be supported in his endeavors not threatened with removal.

“These recent allegations it would seem, are further evidence of the close connection between foreign loggers and the top level leadership of the DCGA. The public have very little trust in government when it comes to dealings with the logging industry, and this further erodes what little trust is left. The Prime Minister must explain to the public where his government stands in all of these, and whether he condones this practice.

“For the sake of our people I call on our national leaders to respect our provincial governments and allow them to take leadership in their respective provinces,” the Opposition Leader further adds.