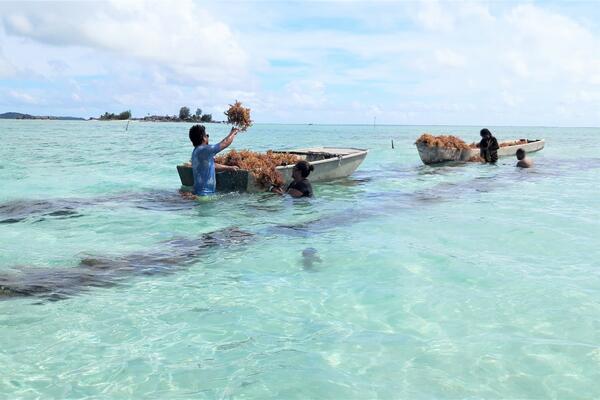 Seaweed farmers in Choiseul province are hoping the government will support them through the Economic Stimulus Package (ESP).

A number of farmers on Wagina have submitted their application for support through the ESP.

“We recently had a team from the government that visited us and told us about the funding” seaweed farmer, Bakaia Tatoke says.

He says since such funding is available for farmers like him, he submitted his application, along with a few others.

The Wagina seaweed farm was said to start in 2004 when seed material was transferred from Rarumana in the western province.

Tatoke says he was one of the first seaweed farmers in Wagina.

“We started off with support from the European Union (EU). Since then I continued being a seaweed farmer till now”, he says.

Tatoke says monies from the seaweed business pays for his children’s education.

He says he had been able to send his elder children to school through money from seaweed.

Another seaweed farmer, Tamoita Teingira says they really need support from the government.

Teingira says most of his family members are also in the seaweed business.

“We come from big families and there are times we need support especially to buy materials for our seaweed farm”, Teingira says.

He says most of them also did not go to school so they do not really know how to apply.

“This is the first time for us to apply for such funds. We are just submitting our application with the hope the government will recognize us and the work we do”, Teingira says.

In March 2015, the Ministry of Fisheries and Marine Resources reported that 533 tons of dried seaweed has been exported from November 2014 (five months) with an estimated export income of SBD$1,788,725.

The Wagina farms reportedly have an average monthly production of dried seaweed in excess of 80 tons and have dominated the production figures.

Solomon Islands continue to be the largest seaweed producing nation in the Pacific. Production has increased from 2014 and is expected to continually increase as new farming sites and farms are developed and seaweed is harvested.

The seaweed species farmed in Solomon Islands are said to be used for toothpaste, flavored-milk drink and pet food.