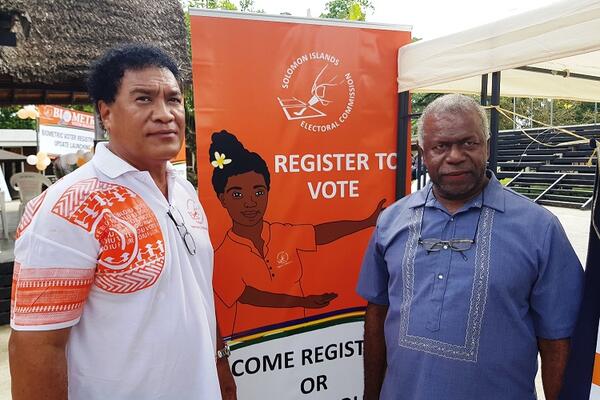 Chairman of the Commission and Speaker of the National Parliament Mr. Ajilon Nasiu launched the start of the exercise which aims to enroll all eligible people who are 18 years and above prior to the 2019 National General Election.

In his address, Mr Nasiu said voter registration is the foundation of the integrity of Elections and it is important that people register in order to exercise their democratic right of electing their national leaders.

Solomon Islands had so far held 10 trouble-free and fair National General Elections in a span of 40 years of nationhood which has set the benchmark that the country must continue to build on.

Mr Nasiu said the SIEC has come a long way and has made a lot of progress in conducting voter registrations and elections.

The Chairman made reference to the introduction of the Biometric Voter Registration (BVR) system for the 2014 voter registration exercise which had helped to address the widespread issue of double registration as an example of the many improvements in the country’s electoral system.

Over the years, the Electoral Commission has also embarked on a reform that aims to improve the election system and strengthen election processes.
The reform, among other aims, looks at how new legislation to update the National Parliament Electoral Provisions Act to make it more streamlined and effective.

The reform also looks at reviewing the system we are using to vote Members of Parliament and to see whether other election systems might better meet our needs.
These are some of the ongoing activities of the SIEC and elections in the country.
Mr Nasiu announced that the process of voter registration will commence on September 3 nation-wide.

This exercise is an update of the existing voter list and not a new registration process. This means names of people who have already registered in 2014 will be retained on the list for next year’s NGE.

The exercise is geared towards capturing those that have turned 18 years after the 2014 voter registration and those that were eligible but did not register that year.
It is estimated that across the country some 35,000 young people are now eligible to register as a voter.

Mr Nasiu said the register also needs to be updated to reflect where people are now living and also to clean up the list by removing names of persons who have passed away since it was first compiled.

The process will also involve displaying the provisional list for people to check, followed by the Omission and Objection phase where people can seek corrections or object to another person’s name on the list.

The exercise has been supported by the Australian Government, the European Union and the United Nations Development Programme (UNDP) which the Chairman has sincerely acknowledged at the launch.