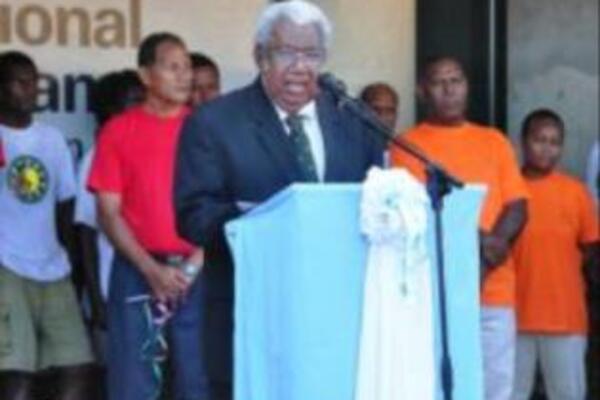 "I call on you to do your best to reach every part of the country to ensure the transparency and integrity of the final voters' list," Sir Peter said.
Source: STO Archives
Share
Thursday, 14 January 2010 11:17 AM

The Chairman of the Solomon Island Electoral Commission, Rt. Hon. Sir Peter Kenilorea, has called on voter registration officials to make sure that everyone who is 18 and older is registered to vote, and that those who have left the country, or may have gone to glory, be removed from the voter's list.

Sir Peter made the comments at the start of training for registration officials in Honiara today.

"I call on you to do your best to reach every part of the country to ensure the transparency and integrity of the final voters' list," Sir Peter said.

Voter registration is the important first part of elections where a list is made of people who can vote in the upcoming election and takes off the names of people who no longer reside in that area or have died.

Voter registration fieldwork will begin on 25 January until 25 March. More than 700 registration officials will go house to house across the country during a 60 day period.

Officials will be wearing bright orange coloured t-shirts, and will be carrying registration forms and the 2006 voters' list for updating. To vote in the next national general election, everyone aged 18 and over must be registered with one name, and in one place only. Sir Peter said that registration officials must make sure that their work is done according to the laws and regulations of the country.

"The election is people's chance to choose their Member of Parliament. We must therefore make sure that the final voter list is accurate with only those names that are supposed to be on the list in each constituency," Sir Peter said.

"The voters' list has been criticized in the past, so let's do it right this time and involve everyone in the process," PS Fakari'i said. "I urge all registration officials to play their part and do their work properly so that the right people are registered for the coming election."

PS Fakari'i said that the government had committed to providing funding for voter registration to go ahead. "Voter registration cannot stop and start due to lack of funds. We must make sure that the process runs smoothly as the world will be watching."

The three day training program brings together the 10 Registration Officers and 10 Revising Officers in charge of voter registration activities in the nine provinces and Honiara.

Officials will go back to their province next week to train over 700 assistant registration officers to conduct the house to house voter registration exercise.
Chief Electoral Officer, Polycarp Haununu, said the training program aims to explain the important roles and responsibilities for registering people as voters for the upcoming national election.

"It is important that Registration Officers and Revising Officers get the proper message back to assistant registration officials in their home province who will actually be conducting this important, but challenging national exercise that will give people their chance to vote," Mr Haununu said.