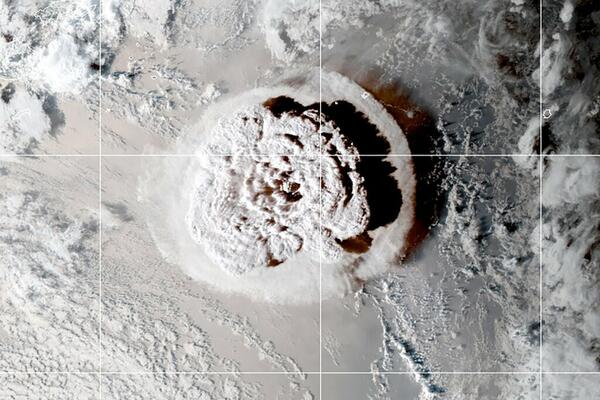 Satellite images showed a huge eruption, generating a mushroom like plume of volcanic ash and steam. Reports say the sonic boom could be heard as far away as Alaska.
Source: Cira/Noaa/Via Reuters
Share
Sunday, 16 January 2022 13:03 PM

An undersea volcano that has been spewing lava for some time has erupted in Tonga, tsunami waves lashed the capital city Nuku'alofa and spread to parts of the Pacific.

The volcano, known locally as the Hunga Tonga-Hunga Ha’apai, is about 40 miles north of the Island of Tongatapu, had been relatively inactive for several years. It began erupting intermittently in December.

Tsunami waves were reported in Fiji, Cook Islands, Samoa and Vanuatu. Warnings were issued for coastal towns in New Zealand, Australia, Japan and Hawaii. Communities in California and other parts of the western United States were also on alert.

Satellite images showed a huge eruption, generating a mushroom like plume of volcanic ash and steam. Reports say the sonic boom could be heard as far away as Alaska.

The eruption disrupted internet service to Tonga, cutting off the Island Kingdom from the rest of the world with families anxiously trying to get in touch with relatives.