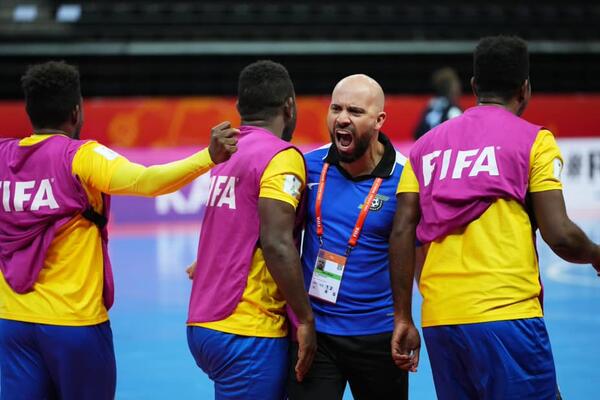 Leite was born and raised in Brazil where he developed a love for futsal and showed real promise as a young player.
Source: Supplied
Share
Thursday, 30 September 2021 10:38 AM

The Solomon Islands are on track for a third straight defeat at the 2021 Futsal World Cup but coach Vinny Leite celebrates each consolation goal with all the enthusiasm of a Champions League winner.

After losing 6-0 to Morocco and 7-0 against Portugal, their final group game against Thailand ends in a 9-4 defeat.

It might not look like much, but their four goals and the fact they didn't concede into double digits is a significant sign of progress for Leite's underdogs.

The tiny Pacific nation of just over 650,000 people has qualified for the past four Futsal World Cups - most recently edging out New Zealand for a place at the delayed tournament in Lithuania.

While qualifying is itself a massive achievement, the Solomon Islands continue to progress on the world futsal stage as they try to punch well above their weight.

At the World Cup in 2008, they lost 31-2 against Russia and conceded 69 goals across four games. There's little wonder why Leite cherishes the small victories in a 9-4 loss 13 years later.

Leite was born and raised in Brazil where he developed a love for futsal and showed real promise as a young player.

Life in the South American country was tough with mounting bills and no way to pay them leading him to an opportunity to gain English language skills during a six-month stint in Australia.

The then 25-year-old did a variety of menial jobs to make money and just days before he was set to return to Brazil, a game of futsal changed his life.

"I was about to leave Australia on a Tuesday and then on a Saturday, I went to play a futsal match against the state team from the Northern Rivers region," Leite told Sporting News.

"I knew that would be the game of my life because my friend said beforehand that they were looking for a player and coach.

"Fast forward, you know, nearly 12 years, I became a permanent Australian resident last May and I've got my own business now (Just Futsal NSW) and I'm pretty fluent in English now."

A Brazilian Aussie takes charge of the Solomon Islands

So after a chance relocation Down Under, how did a Brazilian living in Australia end up coaching the Solomon Islands' futsal team?

While playing futsal in Queensland, Leite crossed paths with their then coach and organised a tournament for the team against various clubs in Australia.

He ultimately looked after the Solomon Islands' side after their coach was unable to travel and impressed so much he was invited to become an assistant at the 2016 Futsal World Cup.

"The only position they had available was as the goalkeeper coach," Leite said.

"But I told them, 'I'll be the ball boy. I'll be the waterboy. I will tie their shoelaces. I will do anything to go to the World Cup'."

Two years later and Leite was the first person the team turned to when they were left needing a new leader.

A lightweight against heavyweights at the Futsal World Cup

Since the start of his relationship with the Solomon Islands, Leite has focused on teaching a team, previously focused on individual attacking flair, how to defend and have some structure to their play.

While the nation's skills and drive to succeed has seen them stand out in the Pacific, they remain underdogs on the world stage.

"So it's like if you talk about boxing we are lightweights. You know in the lightweight division, which are the Pacific Islands, we are the champions," Leite said.

"Then we go to a World Cup and that's like a heavyweight fight that we will always struggle in but we want to go from lightweight to the middleweight division now."

Fighting above their weight class, the Solomon Islands lost all three of their recent World Cup games, but they weren't brutal knockouts like those suffered a decade ago.

"Looking at the performances of the teams that we played against and considering where we come from I think we did great," Leite said.

"For us, the experience was amazing. If we did not prepare and improve on every aspect of our game, I think the score lines could have been at least double digits.

"I told the players, we're here to impress the world and if we're going to lose, let's make it a respectable defeat. We don't want to lose 31-2 again.

"I had a disagreement with one of our managers during the tournament because he felt we should be attacking more and I asked him, 'Do you want us to lose 5-0 or 11-1?' And he said 11-1. That's the mentality I'm trying to change.

"So when we lost our games, the players were actually happy. Not happy with the result. But with the performance as we defended well and could hold our heads high."

When Leite goes to the Solomons Islands, he finds a country in love and obsessed with futsal.

One training session he held saw nearly 1000 locals show up to watch, while Leite himself is often stopped on the streets for a photo.

That's a far cry from Australia's current stance on futsal - the country failed to qualify for the recent World Cup and a fractured relationship with football is not helping the game's cause.

"I think Australia is the only country I've been to that disrespects futsal," Leite said.

"The football culture tells players not to play futsal. Tells them it's bad for their joints, teaches them to be selfish, claims it's played on a bad surface.

"Australia disrespects futsal and we could be a powerhouse at the sport with the right investment and approach.

"I always tell football clubs, 'If you cannot incorporate futsal into your program, at least co-operate with futsal. Let's work together and don't stop your players from playing futsal'.

"A lot of clubs tell their players that if they play futsal, they'd be kicked out of the team."

Despite those challenges, the appetite for futsal in Australia remains strong and Leite is hopeful it can be harnessed and not hindered moving forward.

"Australia could be at the next World Cup and follow in Thailand's footsteps of making it past the group stages.

"Football has to embrace futsal. It can't be scared about losing players to futsal as you're just shooting yourself in the foot that way."

Considering his background and recent experience, Leite seems to be a man worth listening to.