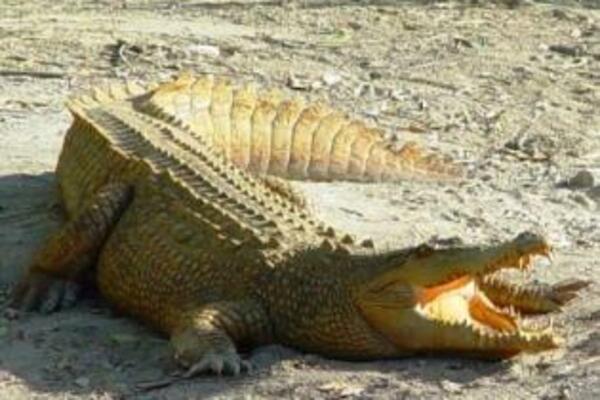 The massive crocodile, similar to the one pictured above, was said to be very close to the village settlement when it was caught.
Source: Photo supplied
Share
Friday, 19 August 2011 09:42 AM

A six feet long crocodile was captured this morning at Tamboko in West Guadalcanal by locals.

Witnesses say that the massive crocodile was caught by fisherman this morning using traditional methods of luring the deadly creature.

"The crocodile was very close to the village, which caused concern for us so we decided to catch it," said one of the fishermen.

John Toki of the SIBC visited the area and saw the crocodile, one of the largest his seen in recent times, tied and lying helplessly.

He says that those who caught the crocodile are planning to sell it to Asian workers who are building the Tamboko bridge and road.

Villagers are again urging responsible authorities to do something about the growing crocodile population before it is too late.

"We are now catching bigger sized crocodiles on a very regular basis," said one of the fishermen. "The danger is when they come close to human settlement because we know they are hunting for food which is very dangerous."

Similar sentiments of fear have been expressed by those from Russell Islands and Ngella in Central province.