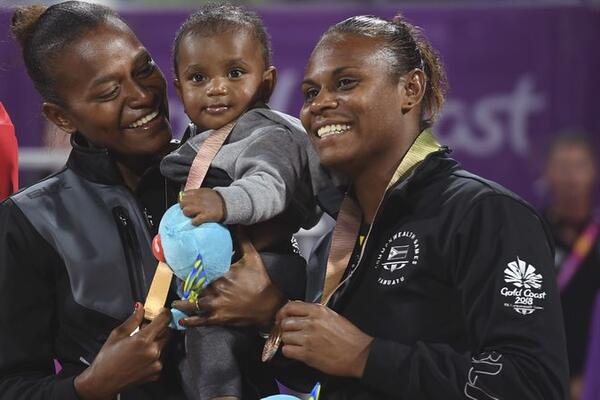 The Vanuatu pair have been labelled the "Super-Mums" during the Gold Coast Games.
Source: radionz.co.nz
Share
Friday, 13 April 2018 07:57 AM

Vanuatu is celebrating a second Commonwealth Games medal after their women's beach volleyball team beat Cyprus in the playoff for bronze.

Miller Pata and Linline Matauatu were in complete control at Coolangatta Beach, winning in straight sets 21-14 21-10.

After playing together on the Beach Volleyball World Tour, in the Pacific Games and at World Championships, Linline Matauatu said they didn't feel any added pressure with a medal on the line.

"We've been around the world for a long time," she said.

"We missed the Olympics so for Commonwealth Games we do a lot of training to get any medal we get."

"The girls turned up with the bronze medal in mind and they didn't want to accept anything less," Zunker said.

"They showed from the get-go that they were really committed to the strategy we had put in place as a team and played it really well and took it right through to the end of the match."

The bronze medal was all the more special for Miller Pata, who gave birth to a son in August and had eight-month old Tommy watching on from the stands.

"Yes it's been challenging but I'm really happy to have him with me so he's been entertaining me," she said.

"It's really tough but we managed to get here and get a medal so I'm really happy for him."

The Vanuatu pair have been labelled the "Super-Mums" during the Gold Coast Games.

Linline Matauatu hoped their example of juggling sport and family can inspire other women at home.