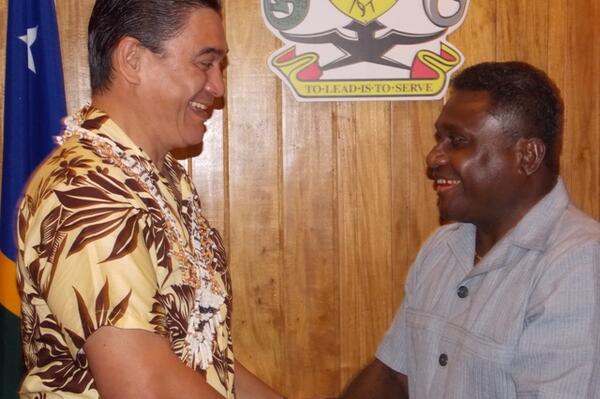 The Solomon Islands Prime Minister, Hon. Gordon Darcy Lilo has highlighted the importance of strengthening the Melanesian Spearhead Group (MSG) and its visions for the benefit of the Melanesian people.

The Melanesian Spearhead Group was the main topic of discussion following a courtesy call to the Hon. Lilo by his Vanuatu counterpart, Mr. Moana Carcasses Kalosil.

Prime Minister Lilo said it is important that the MSG countries stand as a strong regional group in the region to help the plight of the Melanesian people, further stating that Vanuatu and Solomon Islands share close ties through their ancestors.

“I believe through these connections that both countries could build more tangible programs to help facilitate trade between two countries,” he said.

Prime Minister Lilo also stated that the Government are now in the process of upgrading two airports in Temotu Province that could open up links between the two countries.

Vanuatu Prime Minister Kalosil in response also stated similar sentiments that MSG should stand as a blueprint for the region.

“Vanuatu will always be a friend and brother to Solomon Islands,” the Vanuatu Prime Minister said.

Mr Kalosil has also extended an invitation to Prime Minister Lilo to visit Port Vila. He has also congratulated the Government and people of Solomon Islands on the success of RAMSI's 10th anniversary celebrations.