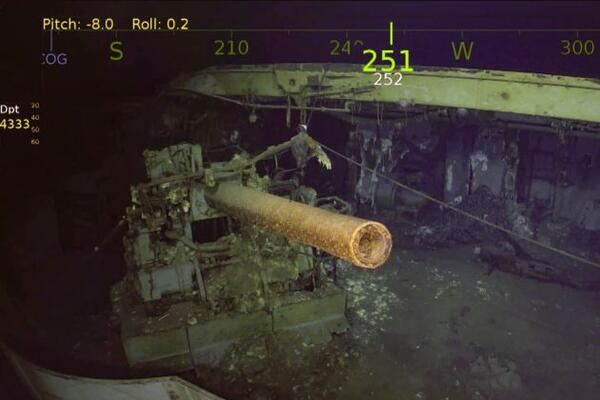 The USS Wasp, an aircraft carrier that saw service during World War II from Iceland to Guadalcanal, Solomon Islands has been located lying 14,000 feet deep in the Coral Sea 77 years after its sinking.

It’s the latest find chalked up to the R/V Petrel, a research vessel whose expeditions have been funded by the late Microsoft co-founder Paul Allen and his estate.

The Petrel has been plying the waters of the Pacific Ocean and surrounding seas for years, to document the resting places of historic shipwrecks and conduct scientific studies. The Wasp was found on Jan. 14 with the aid of a sonar-equipped autonomous underwater vehicle and a camera-equipped remotely operated vehicle.

The Wasp was commissioned in 1940 and began service on the Atlantic front, providing defensive fighter cover for U.S. Army planes landing in Iceland. It also played a support role in Operation Calendar and Operation Bowery, two U.S.-British campaign aimed at defending the island bastion of Malta against German and Italian air raids.

When the Wasp accomplished its mission and headed back to the British Isles, Prime Minister Winston Churchill messaged his thanks for the aircraft carrier’s double duty. “Who said a wasp couldn’t sting twice?” he wrote.

The ship’s final mission was to serve as an escort for the 7th Marine Regiment, which was heading to Guadalcanal with reinforcements for the pivotal battle there in 1942.

On Sept. 15, 1942, four torpedoes from a Japanese submarine struck the Wasp and set the ship ablaze. Within minutes, the Wasp was engulfed in flames, but Capt. Forrest P. Sherman held off on abandoning ship until he was satisfied that no survivors were left aboard.

Forty-five aircraft went down with the ship, and some of them show up clearly in the R/V Petrel’s video of the underwater wreck site. But most of the 2,248 men of the Wasp got off safely. Fewer than 200 men died, and 366 were wounded.