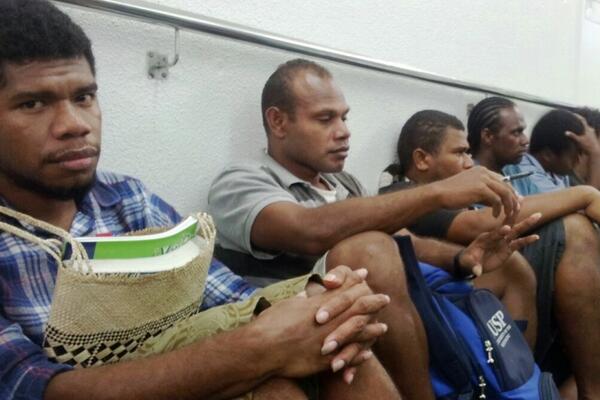 Prime Minister Lilo has acknowledged the students for recognizing his Government’s efforts in helping future leaders of this country.
Source: Photo supplied
Share
Wednesday, 02 April 2014 10:01 AM

In a letter addressed to the Prime Minister, the USPSASI executive acknowledged the response by Prime Minister Lilo following the request by the students to increase student scholarships.

“With due respect and pride, to you as the leader of this sovereign nation we (students) offer our acknowledgement for responding to increase students’ scholarships,” Wilfred Luiramo USPSASI president said.

Mr Luiramo said at first they felt hopeless but the Prime Minister’s swift response gave them hope as future leaders of this nation.

“Your response is worth the future of this nation and also it will see more positive results in the development of sectors in this country that has been ignored by past leaders,” he said.

“Students are really counting the stand you as Prime Minister have taken and we salute you for your quick response in addressing the scholarship issue.”

The USPSASI President said they are looking forward in working with the Prime Minister and his Government in addressing other issues concerning students.

Meanwhile, Prime Minister Lilo has acknowledged the students for recognizing his Government’s efforts in helping future leaders of this country.

Mr Lilo wished the students well in their studies as his Government will continue to work towards a better understanding for a better future for the students.