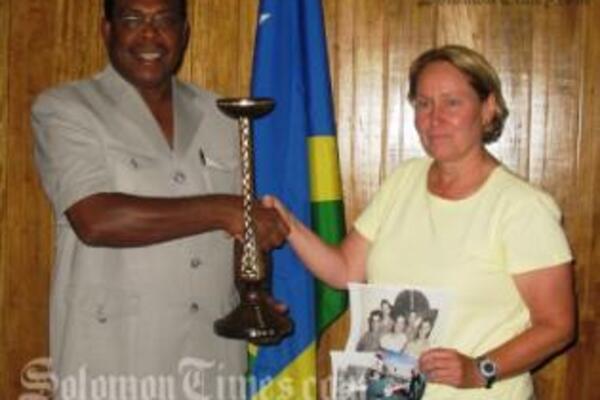 The hand carved wooden candle holder returned to Prime Minister Dr Derek on Saturday, 67 years after it was discovered at a location in the Gela group of Islands by a US Navy during World War II.
Source: Photo Supplied
Share
Monday, 22 June 2009 12:17 PM

A hand carved wooden candle holder from the Solomon Islands has been returned to Prime Minister Dr Derek on Saturday, 67 years after it was discovered at a location in the Gela group of Islands (Florida Islands) by a US Navy during World War II.

Dr Eileen came to Solomon Islands in 2008 as a worker under the Loloma Foundation program.

She went back to the US and wrote a War Veteran Story which was published in one daily magazine there.

Upon reading the story, Mr Don Chalmer immediately contacted her through email seeking advice on how he could return the artifact to Solomon Islands.

Through their email contacts, Mr Chalmer relayed his story to Dr Eileen about how he got the carved candlestick holder.

"In 1942 August I was assigned on the US boat Coxswain for more than four months. While stationed at Gavutu Islands; I made a tour of part of the Florida Islands and came upon a native chapel that has been ransacked by the Japanese"

"I found two beautifully hand carved candlestick holders, one of which made it home with me."

Mr Chalmer said he had sent a letter to the Honiara City Mayor asking who might be the proper person to contact regarding returning of the object.

Prime Minister Sikua also commended Dr Eileen for the correspondent she made with Don Chalmer to enable the candlestick holder returned to Solomon Islands.

He said the candlestick holder will be handed over to the national museum for storage and also for show.