US Says a China Military Base Will Cross the Red Line 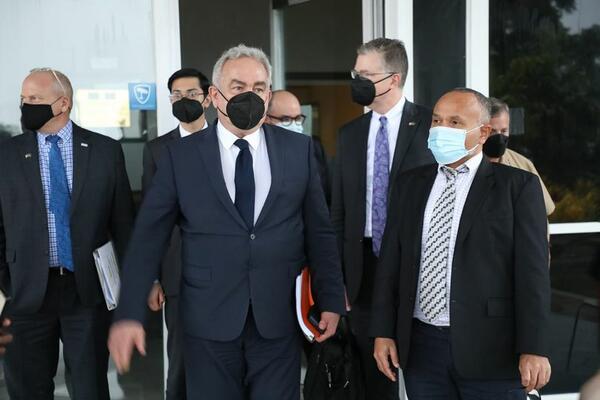 He said through the deal with China, Prime Minister Sogavare has placed Solomon Islands in the center of the geopolitical struggle in the Indo-Pacific.
Source: Supplied
Share
Monday, 25 April 2022 10:05 AM

The Opposition Leader in a statement acknowledged the message communicated to him during the meeting with Dr. Kurt Campbell, US National Security Council Indo-Pacific Coordinator on Friday.

Hon. Wale said he informed Dr. Campbell that a new government would terminate the deal, as it is opposed by the vast majority of Solomon Islanders.

Responding to narratives from the government asking where US was for the last few decades, Hon. Wale said such reactionary irrational statements are petty and emotional, and cannot be part of Solomon Islands approach to foreign relations in the current complex geopolitical geostrategic competition.

Hon. Wale said the manner in which Prime Minister Sogavare is treating the US clearly portrays that he is pro-China and anti-US.

He said this is contrary to the so-called ‘Friends to all and enemies to none’ policy.

Despite any protestations to the contrary, Hon Wale said Prime Minister Sogavare’s actions and words betray his true position that all foreign policy is weighted by his pro-China anti-US stance.

Hon. Wale said recognition of Beijing does not need to include the recently signed security deal.

He said through the deal with China, Prime Minister Sogavare has placed Solomon Islands in the center of the geopolitical struggle in the Indo-Pacific.

“That is a very dangerous position to be in for our country. Rather than the deal leading to more security for Solomon Islands, it risks achieving the opposite. The geopolitical struggle has already had internal effects on our country, and because of the deal, unfortunately we are to expect more,” Hon. Wale said.

The Opposition Leader said Ministers in Cabinet ought to reflect on the dangerous path that Prime Minister Sogavare is leading Solomon Islands on.

He said Ministers must not blindly follow him on this very significant matter.
Meanwhile, the Leader of Opposition also thanked the US high-level delegation for the opportunity to meet yesterday evening.