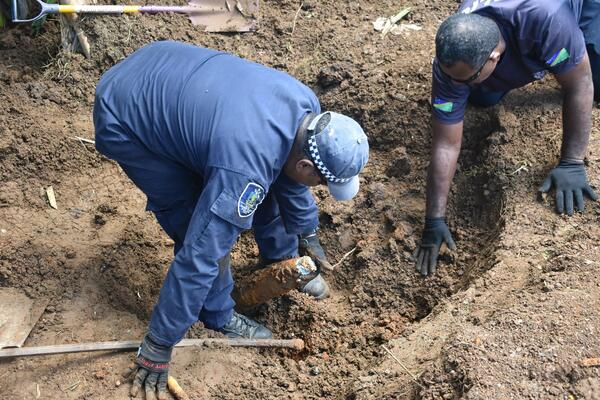 The United States says they have a longstanding commitment to helping Solomon Islands address unexploded ordinance (UXO) contamination left over from World War 2.

The US Embassy in Port Moresby told Solomon Times Online that over the past decade, they have invested more than $6 million in support of the Solomon Islands government’s effort to survey and clear UXO under the US Conventional Weapons Destruction program.

Recently the State Department has worked with the Norwegian People’s Aid (NPA) to conduct surveys of unexploded ordnance in Solomon Islands.

The US Embassy says unfortunately those efforts in Solomon Islands have been on hold since September 2020 after two NPA members were killed while allegedly attempting to disarm a UXO.

“We support the investigation into the accident by the Explosive Ordnance Disposal (EOD) unit of the Royal Solomon Islands Police Force (RSIPF), but we cannot move forward in our UXO efforts until the report is completed”.

The Embassy says they will continue their work with the Government of the Solomon Islands once the investigation by the Royal Solomon Islands Police Force (RSIPF) is complete.

The United States is the world’s single largest financial supporter of conventional weapons destruction, investing more than $4 billion in more than 100 countries since 1993 to promote international peace and security by addressing humanitarian hazards from landmines and unexploded ordnance in post-conflict countries, as well as by partnering with nations to reduce the availability of excess, loosely-secured, or otherwise at-risk small arms and light weapons and munitions. In 2020, the United States funded conventional weapons destruction efforts in 49 countries with more than $259 million.

The US Embassy says the EOD unit in the RSIPF was created through a joint assistance initiative between the United States and Australia.

“The presence of the EOD unit and their ability to lead an independent investigation is a testament to the success of the U.S.-Australian-Solomon Islands collaboration”.

The response by the US Embassy in Port Moresby was made in light of the recent WW2 bomb explosion in Honiara.

More unexploded WW2 bombs have been unearthed in other parts of the city since the explosion.