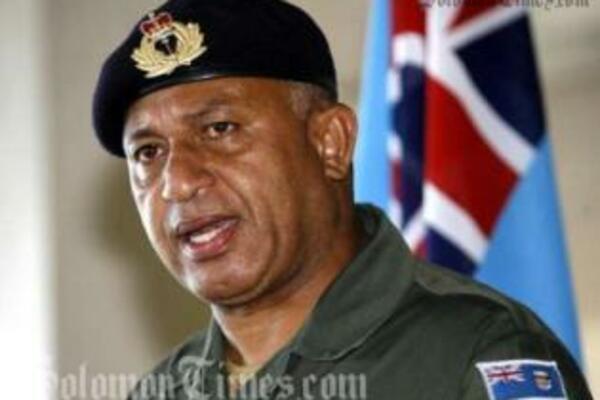 Military Commander, Voreqe Bainimarama, has been reappointed and is now the caretaker Prime Minister.
Share
Monday, 13 April 2009 04:42 AM

Following Fiji's Court of Appeal's ruling that the interim government which took power after the 2006 coup was illegal, the President abrogated the 1997 constitution and made himself Head of State, announcing that he would be appointing a caretaker Prime Minister and cabinet.

On Saturday, military commander, Voreqe Bainimarama, was sworn-in as caretaker Prime Minister and following that, the ministers that made up the interim government were also reappointed.

According to Fiji Times Online, Bainimarama addressed the nation on Saturday evening, stating that the President appointed his team "because we want continuity and reform agenda to be fast tracked".

He said under the new legal order, he and his interim ministers and the security forces endorsed, supported and would implement the vision, direction and decrees stated by Ratu Iloilo.

"We shall insure that elections are held at the latest by September 2014 under an electoral system that is based on equal suffrage," he said.

Mr Bainimarama said we must rid ourselves of our past prejudices, past negative influence and be focused on building a better Fiji.

According to Fijilive, Bainimarama denied advising the president to abolish the constitution despite admitting that he did visit the president 'on Thursday evening to inform him of the Court of Appeal's ruling'.
He stated that the 'President had come to the decision himself after consultations with his advisors' and the 'abrogation of the Constitution was the President's own decision'.

'He added the composition of his interim Government that was announced this afternoon was not known to him and the prerogative is the President's'.

News of the recent updates in Fiji has generated responses from around the world with the United Nations stating that it was a "clear attempt to prolong rule by an unelected executive".

According to Fiji media, in a press statement, UN Secretary-General Ban Ki-moon 'said he strongly deplored the political developments following the Thursday ruling of the Fiji Court of Appeal and that they were a "clear rejection of the legal process" and called 'for the urgent restoration of a "legitimate government and constitutional order," adding that "the latest measures are a clear rejection of the legal process'.

The Commonwealth Ministerial Action Group has deemed the developments unacceptable with its Secretary-General Kamalesh Sharma describing the 'Constitution's abrogation, the dismissal of the judiciary and the postponement of elections to September 2014 as "retrograde steps which take Fiji further away from the return to civilian constitutional democratic rule"' and that the "unwelcome developments are a clear new breach of fundamental Commonwealth political values".

The newly-appointed caretaker government is expected to be in power for five years until elections which the president has stated should be held by 2014.

For more information on the recent developments of the political situation in Fiji, please visit Fiji's local media sites: Fiji Times Online: www.fijitimes.com.fj and Fijilive: www.fijilive.com
However, please note that some news articles may not be available as local newsrooms in Fiji are currently being monitored by the government and some articles may have been removed under state authorities' orders.
For this reason also, some news sources have not been mentioned in the article so as to not cause any unnecessary problems for any media outlets.