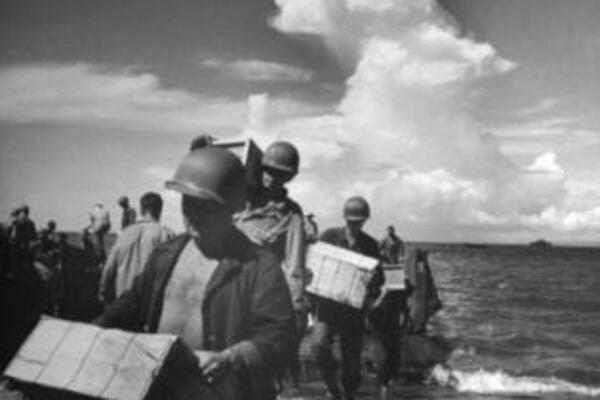 Seventy years ago today in 1942 mark the arrival of the American troupes into Guadalcanal to the beginning of what was to be known as the "Battle of Guadalcanal".

In the early morning hours of August 7th, 1942 the armada of the US Navy's Operation Watchtower Task Force sailed between the southern tip of Savo Island and Cape Esperance into what was then known as Savo Sound.

In the dull light of dawn, Navy crewmen and the Marines they were transporting caught site of their target for the first time: 'Guadalcanal', an island overgrown with tropical plants, steaming jungles, and plantation palm trees.

During the next six months, there would be a brutal campaign against two tireless enemies: the Japanese military and the island's tropical elements. Over 5,000 US Sailors, 1,769 US Marines, 420 US airmen, and approximately 31,000 Japanese sailors and soldiers were killed during six major naval battles, countless dogfights, and numerous ground offenses. When it was all over, 50 allied and Japanese warships had been destroyed in Savo Sound, giving it its new name of Iron Bottom Sound.

History tells us it was a just campaign that was necessary to protect vital shipping lanes between the United States and Australia.

During the early part of 1942, Japan had expanded its sphere of control into the southern and central Pacific, threatening Australia's national security and the movement of goods by sea. Upon receiving reconnaissance reports of an airstrip being built by the Japanese on the northern coast of Guadalcanal, the Combined Chiefs of Staff headed by Admiral Ernest King made the decision to take the island and the airstrip.

Not long after US forces landed on Guadalcanal, the airstrip was secured and renamed Henderson Field in memory of Marine Airman Lofton Henderson, who was killed during the Battle of Midway. Its strategic location between New Caledonia and Bougainville would make Henderson Field invaluable in assisting Allied forces in the march toward Rabaul.

Home front news in the United States thrust the obscure island of Guadalcanal into American consciousness as newsreels and newspapers chronicled the battles. In 1942, nearly every American could tell you where the Solomon Islands were located and why they were important as they followed the island hopping news of their fighting sons, brothers, fathers, and uncles.

Today, United States Consular agent, Mrs. Keithie Saunders and the Solomon Island Government will hold a somber anniversary marking 70 years since our diverse cultures converged on the shores of Guadalcanal.

American, Australian, New Zealand, Japanese, and Solomon Island dignitaries, military representatives, veterans, and ordinary citizens will assemble at this meticulously kept American memorial in Skyline Ridge overlooking Iron Bottom Sound in order to pay tribute to those who served and those who never came home.

This anniversary is a unique opportunity to remember and to rebuild the anemic relationship that currently exists between modern day Americans and Solomon Islanders.

Mrs. Saunders also confirmed that the celebrations will also include the Prime Minister unveil the honor roll at the Solomon Scouts and Coast watchers Memorial at Point Cruz. Mrs. Saunders stated that a United States band is also in Honiara and will perform at the Port Authority Green Opposite the Westpac bank at Point Cruz this afternoon. United States Landing Commemorated