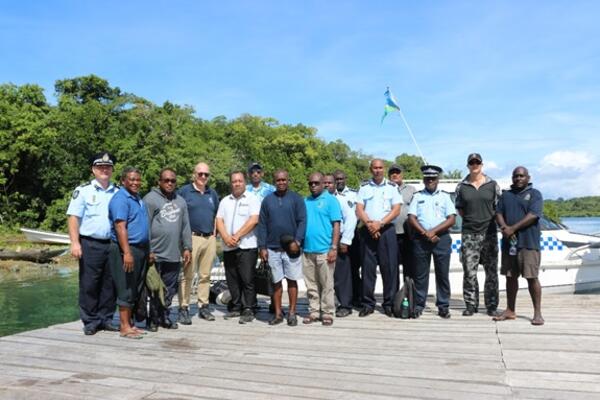 The visit was to observe COVID-19 preparedness and response activities on Solomon Islands’ border with Bougainville, and to review the progress of cooperation under way between Australia and Solomon Islands to strengthen border security.
Source: Supplied
Share
Tuesday, 05 May 2020 08:15 AM

The visit was to observe COVID-19 preparedness and response activities on Solomon Islands’ border with Bougainville, and to review the progress of cooperation under way between Australia and Solomon Islands to strengthen border security.

Senior members of the RSIPF, Acting Commissioner Mostyn Mangau and Deputy Commissioner Ian Vaevaso, were also part of the delegation.

The DPM thanked the SIG border personnel for their ongoing efforts to secure the country’s Western border.

He assured the front liners that the Government would continue to facilitate urgent priorities together with the generous assistance of the Australian Government to reinforce and enhance border operations.

“I would also like to acknowledge the assistance of the Australian Government in providing an additional two fast crafts to support border operations and ongoing commitment to construct a patrol boat base in the Shortland Islands,” he said.

The DPM led SIG Delegation together with the Australian High Commissioner and Senior Department of Foreign Affairs and Trade (DFAT) Personnel; were also briefed on the current status quo of border operations, while the joint delegation also took the opportunity to update Border Personnel on measures being taken to support the deployment.

The Minister for Police Anthony Veke also expressed his gratitude on behalf of the Government to Department of Foreign Affairs and Trade (DFAT) for their ongoing bilateral support towards the Ministry of Police National Security and Correctional Services.

He also acknowledged the support of the Australian High Commission for making arrangements to accompany the SIG Delegation.

The delegation then travelled to Harapa village on police stabicraft and fast-pursuit vessels provided by Australia. At Harapa Ministers conducted community awareness outreach on the Solomon Islands Government’s COVID-19 preparedness and response activities, and visited police accommodation rebuilt by the Australian Defence Force in 2019.

High Commissioner Strahan said Australia was pleased to be working closely with Solomon Islands as it steps up its COVID response on the western border.

“It has been great to see the RSIPV Gizo patrol boat and fast pursuit boats provided by the Australian Government in action at the western border helping to keep Solomon Islands secure and COVID-free,” he said.

“It’s an exciting time for our border cooperation. We are currently working together with the Solomon Islands Government on the design of the new permanent Border and Patrol Boat Outpost in the Shortland Islands, and providing additional assistance to help the RSIPF deploy members effectively at the border.

“As close friends and partners, Australia and Solomon Islands are fully committed to ensuring our neighbourhood remains safe, peaceful and stable.”