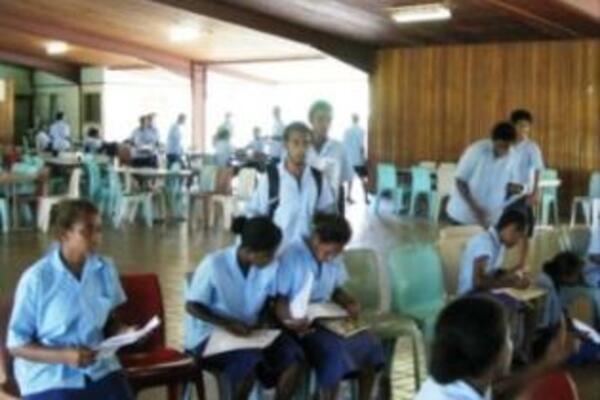 Students due to sit their Form Five exam are relieved that the situation has been resolved.
Source: Photo supplied
Share
Friday, 02 September 2011 08:35 AM

Parties to the industrial dispute between Public sector unions and the government have resolved their differences by agreeing to a four per cent increase in the Cost of Living Adjustment (COLA) demanded by the unions.

Members of the national teachers association and other public sector unions went on strike from the weekend after negotiations on an 11.5 per cent COLA increase demanded by the unions failed.

The government's initial counter offer was 2 per cent.

But the Teachers' Association Industrial Relations officer Johnly Hatimoana says a deal was struck yesterday between the Government and the Public Sector Union's Coordinating Committee which resulted on three resolutions.

Mr Hatimoana says they agreed to increase the Cost of Living Adjustment - COLA to four percent after taking into consideration the government's financial situation.

Mr Hatimoana says the two parties also agreed on a two percent automatic increment for all teachers effective from January next year.

The third agreement reached between the two parties was to exempt tax on teachers who receive salaries under SB$20,0000 annually.

SINTA's Industrial relations officer says both parties were happy with the outcome.

Students due to sit their Form Five exam are relieved that the situation has been resolved.

"While we think that teachers deserve better conditions the timing of the strike really affected our preparations," said Deke, a Form Five student. "Exams will be in two weeks, so we hope teachers can now resume."