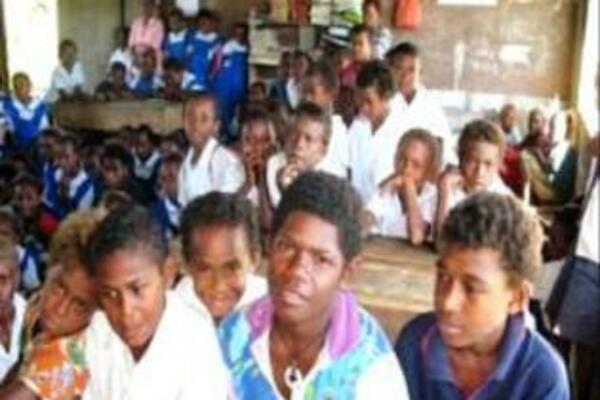 School children across the country would be affected should teachers choose to go on strike.
Source: Photo Supplied
Share
Monday, 21 March 2011 11:46 AM

The Solomon Islands Public Employees Union, SIPEU, and the Solomon Islands National Teachers Association, SINTA, has given the Government until days end today to respond to certain demands put forward by the two powerful Unions.

The notice was issued to the Government early last week, giving it until the 21st of March to respond.

SINTA's Industrial Relations Officer, Johnly Hatimoana, says that the key issue that needs addressing is the payment for Long and Dedicated Service and the Cost of Living Adjustment, or COLA, of 11.5 percent.

Hatimoana stated in a press release that they are hoping the Government would do the right thing and agree to change the interpretation of Long Service Benefit.

Mr Hatimoana says that the interpretation should be broadened to include redundancy, retirement or resignation. "This ensures that such a person can claim benefit, and get payments in full," said Mr Hatimoana. "As it is, the interpretation is quite vague so many who deserve such payment will miss out."

It is understood that the government has met over the matter, and sources say a decision to "move the issue forward," has been made.

SINTA and SIPEU claim a combined membership of close to 120,000 constituting at least three quarters of the public service.