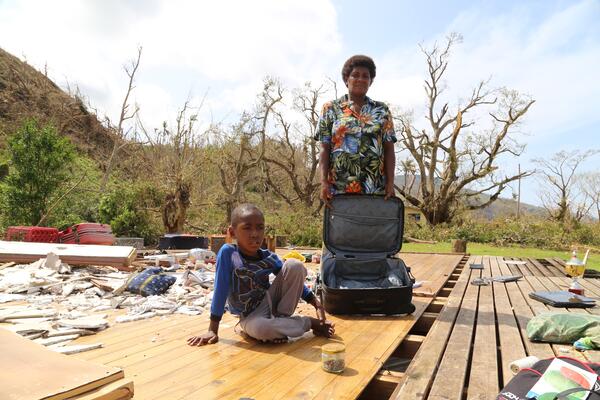 On 24 February 2016, Salome Ululagi stands in the remains of her house destroyed by Tropical Cyclone Winston in Tavua Village, Koro Island, Fiji.
Source: © UNICEF/UN011244/Hing
By UNICEF
Share
Friday, 26 February 2016 11:06 AM

SUVA, 25 February 2016 – As the full picture of the worst cyclone ever to hit Fiji becomes more apparent, UNICEF Pacific estimates that up to 120,000 children across the county may be worst affected.

UNICEF Pacific Senior Communications Assistant, Joseph Hing, travelled with the first shipment of emergency supplies to Koro Island, one of the areas worst affected by Tropical Cyclone Winston. He says of the trip, “The damage to Koro Island is extensive and the scale of the destruction is overwhelming. I spoke to countless people who have lost everything. Their lives have been turned utterly upside down.
“I spoke to a grandmother, whose young grandson was nearly swept away by the storm surge. She told me ‘you can lose all your material belongings but what’s more important is our lives’”. (Joseph Hing’s full account can be read here http://bit.ly/1TA6Lo9 and images/video are available here.)
UNICEF is continuing to work in close partnership with the Government of Fiji and other partners in order to ensure a coordinated and strategic emergency response. The geographic make-up of Fiji and the logistical challenges involved in completing assessments of the outer islands, which consist of some of the most affected areas, pose many barriers, but each day brings more progress.
UNICEF is providing an initial response using prepositioned supplies that have been requested by the Government of Fiji. Funding is needed to sustain and scale up this response. Within the first 24 hours of the request of the Government for assistance, UNICEF has taken the following actions.

On Wednesday night, health supplies which included vitamin A capsules, oral rehydration salts, zinc tablets and six basic health kits were loaded onto boats departing for Gau Island and Batiki Island. Partially funded by New Zealand Ministry of Foreign Affairs and Trade (MFAT), the supplies will be used to prevent infection and illnesses especially in women and children.
UNICEF Pacific Representative, Karen Allen, said, “The Government of Fiji is leading this emergency response and must be commended for their ability to act swiftly in ensuring the coordination of emergency efforts in response to a disaster of this magnitude. Children are often the most vulnerable during emergencies and UNICEF continues to support the Government of Fiji’s efforts in addressing the needs of children. The trauma of the event itself must not be underestimated and many will have suffered greatly. As the days go on, children are working alongside their families and communities to pick up the pieces of the lives they once knew.
“Many children have been affected by varying degrees of loss; the devastation of losing family or community members, the sadness of losing homes or belongings, and the danger of losing places of critical importance to the their development, such as schools and health centres.
“For children in particular, there are many dangers at play in a post emergency situation. The Fiji Government has for instance, stressed the critical need for access to clean and safe drinking water as one of the key priorities as part of this emergency response, especially for children which UNICEF strongly supports. Much of the water supply has been affected due to storm damage and there is there is increasing levels of stagnant water that are a breeding ground for diseases like diarrhea.”
Ms Allen added, “More heartening though are the stories we are hearing of heroism and the very best of humanity. Fijians are renowned for the kindness and generosity and we are seeing nothing but solidarity and shared commitment to recover together.”