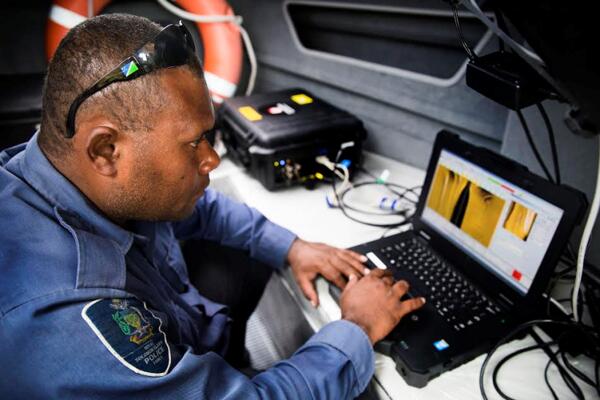 A team of Royal Australian Navy clearance divers are working with the Royal Solomon Islands Police Force (RSIPF) on Guadalcanal during Operation Render Safe 16 to enhance the underwater clearance capability of the Solomon team.

Mine Warfare and Clearance Diving Officer Lieutenant Robert Kelly, of Australian Clearance Diving Team One (AUSCDT1), says they are mentoring the RSIPF in a variety of techniques and technology in underwater Explosive Ordnance Disposal (EOD).

“The team is working closely with the RSIPF using their side scan sonar array in order to find explosive ordnance off the coast of Guadalcanal near Hells Point,” he says.

“There were a significant amount of sonar contacts that we will dive on during the next couple of weeks.”

The Solomon Islands was the scene of heavy fighting during the World War II at sea, on land, and in the air.

The islands were also used as a support and ammunition base. As a result, explosives remain a significant danger to this day.

While using the sonar array the team scanned the position of the USS John Perry, which was sunk by enemy action on August 13, 1943 off Lunga Point in an area littered with possible explosive ordnance.

Lieutenant Kelly says there are thousands of explosive projectiles scattered in the areas of Hells Point and Alligator Creek.

“There is everything from 75mm mortars through to eight-inch artillery rounds, some of which are white phosphorus, which is very difficult to dispose of,” he says.

“There have been 12 islanders killed by explosive remnants of war in the past decade either by finding it accidently or by trying to make fish bombs.”

In Guadalcanal explosives are either detonated on site where it can be safely done or they are taken to the RSIPF Hells Point facility where they are destroyed or neutralised under the supervision of the RSIPF.

The RSIPF deals with around 10,000 explosive remnants of war every year.

“Operation Render Safe is an excellent opportunity for us to do good work with them for the Solomon Islands community,” he says.

“It’s also given us an opportunity to work closely and learn about new techniques with the New Zealanders, United Kingdom and Canadian personnel.”