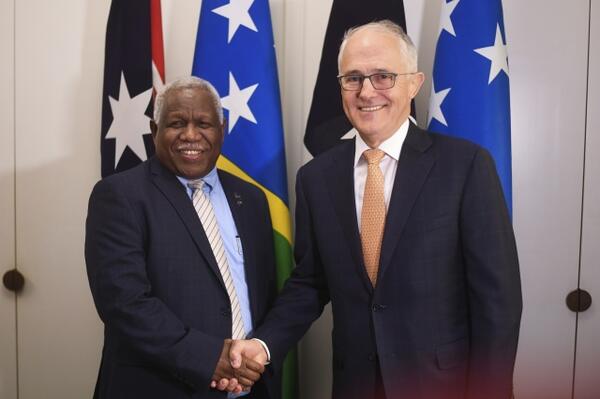 "We spend billions of dollars a year in foreign aid, and this is a very practical way of investing in the future economic growth of our neighbors in the Pacific," says Australia's Prime Minister.
Share
Friday, 13 July 2018 07:55 AM

The leaders of Australia, the Solomon Islands and Papua New Guinea have marked the start of a project to lay an undersea internet cable between the three countries amid criticism from China that Australia is trying to contain its influence in the region.

Prime Minister Malcolm Turnbull was joined by his PNG counterpart Peter O'Neill and Rick Houenipwela from the Solomon Islands in Brisbane yesterday to witness the signing of a memorandum of understanding that paves the way for the project to proceed.

Australia is spending nearly $137 million to lay the cable and Mr Turnbull described it as a "very practical way" of providing foreign aid.

Back in 2016 the Solomon Islands government signed a deal with Chinese telecommunications giant Huawei to lay a cable to Australia.

But the Australian government was concerned Huawei would be permitted to plug into Australia's telecommunications infrastructure.

It believes that while Huawei is an independent company, it retains links to the Chinese Government and could pose a threat to Australian infrastructure in the future.

Last year senior government officials told the Solomon Islands Government that Canberra was unlikely to grant the company a so-called "landing point" for the cable on the Australian mainland.

The Australian Government then announced its support for the PNG cable and a few months later said it would foot most of the bill to lay the cable to the Solomon Islands as well.

In June, Australian company Vocus was awarded the $136.6 million contract to manage the construction of the 4,000-kilometre cable.

Some observers believe the decision was not only due to security concerns but also to counter China's growing influence in the region, particularly its use of loans and grants to build infrastructure projects.

The formal start of the cable project comes amid criticism from within China that Australia is trying to contain Beijing's influence in the Pacific.

In an editorial on Monday the state-owned newspaper Global Times said "China's emergence is an irreversible trend and any attempt to contain the country's growth runs contrary to the trend of the times".

The newspaper was responding to Australian media reports that Australia and New Zealand would sign a new security pact with Pacific Island nations later in the year to counter the growing influence of China in the region.

The security pact, known as Biketawa Plus, is being considered by members of the Pacific Islands Forum and builds on the Biketawa Declaration signed in 2000 that has guided the forum's collective response to crises such as natural disasters and civil unrest.

The Global Times warned it would be a "strategic mistake" if the new security agreement was aimed at China.

"Instead of being overly cautious about China's rise, Australia and New Zealand should avoid misleading the region on China's role, and other regional countries should be clear about the consequences of being misled," its editorial said.

At a press conference in Beijing on Monday China Foreign Ministry spokeswoman Hua Chunying urged New Zealand to "correct its wrong words and deeds and contribute more to the mutual trust and cooperation between our two countries".