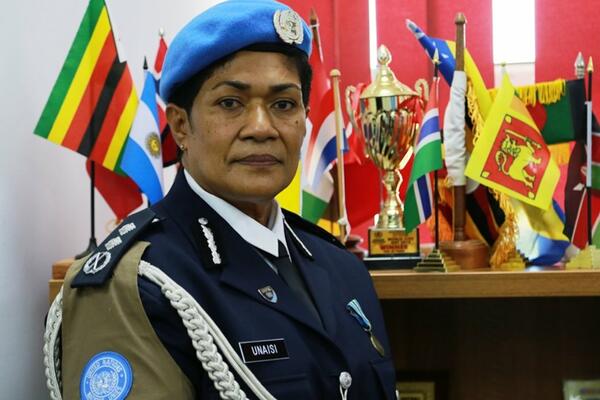 Unaisi Bolatolu-Vuniwaqa is the first female Police Commissioner to serve with the UN Mission in South Sudan.
Source: unmiss.unmissions.org
Share
Monday, 01 April 2019 07:19 AM

It is a long way from her home on the beautiful Pacific island of Fiji to the conflict-ridden country of South Sudan.

But the United Nation’s new Police Commissioner is bringing with her the natural warmth of her people as well as a huge amount of experience to the top job.

Her goal is to boost the number of female officers, and is therefore actively engaging with Police Contributing Countries to make them commit to lifting the proportion of serving policewomen from its current level of 20 per cent.

“We are engaging with mostly the vulnerable people that are protected within the Protection of Civilians sites and, of course, a lot of them are women and children,” said Unaisi Bolatolu-Vuniwaqa. “Therefore, the role of women police in UNPOL is very, very important so that we are able to bridge the gap with the community that we are serving within the PoC site.”

Despite this, she graduated from her training course of 100 officers as the best all round student.

“So very early in my career I had made it a point that I would really work hard and take with me the aspirations of women in the police force, and that has been part of my motivation throughout my career,” said Unaisi Bolatolu-Vuniwaqa.

Her appointment to the top policing job at the UN in South Sudan has been welcomed by the Special Representative of the Secretary-General and Head of the Mission, David Shearer.

“Unaisi has the expertise and experience to lead a large team of police officers in a very challenging and complex environment, but she also has a natural warmth and affinity with the people of South Sudan whom she works closely with,” said David Shearer. “She is also a fierce advocate for empowering women whether it is within the UN system or more broadly encouraging women to aspire to leadership positions and achieve their full potential.”

The primary responsibility of the 1,500 police officers serving in South Sudan is to ensure the safety and security of internally displaced people who have sought sanctuary from ongoing violence in UN protection sites. Currently, police officers from 42 countries contribute to this important service.

“Although our diversity can bring in a lot of strengths, there are also challenges that we will need to meet and be on top of. That way we can get the best out of people to contribute to the mandate of the Mission meaningfully and successfully,” she said.

For Unaisi Bolatolu-Vuniwaqa, it was always her dream, and she says, ultimately her destiny, to work for the United Nations. She hopes other women to follow the same path and join her in making a difference to the lives of others.