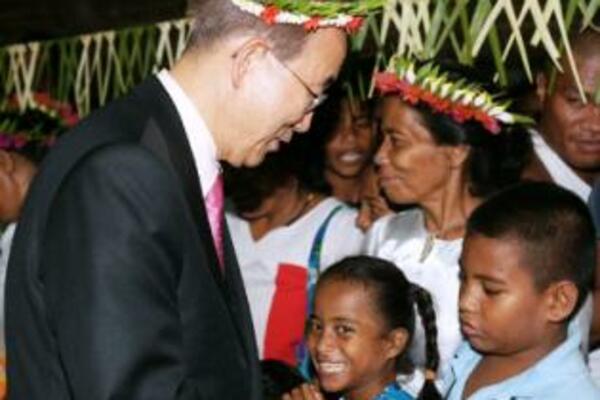 "I will bring your concerns back to the world, to the United Nations General Assembly and to the climate change negotiations in Durban later this year."
Source: UNICEF Pacific/Naoki Takyo
Share
Monday, 05 September 2011 10:54 AM

"Many countries are dealing with climate change. But here, climate change threatens your territory, your culture and your very way of life."

UN Secretary-General Ban Ki-moon made the above remarks in Kiribati, a Pacific island nation already experiencing the consequences of climate change and reaffirmed his commitment to ensuring that the issue of climate change remains a top priority on the international development agenda.

Addressing the President of Kiribati, His Excellency Anote Tong, the Secretary-General continued: "I especially remember how you challenged leaders on climate change. You said: I fear that our children and grandchildren will look back and ask: How is it that they knew what they knew and yet did so little? That is why I am here: to see the frontlines of climate change. I will bring your concerns back to the world, to the United Nations General Assembly and to the climate change negotiations in Durban later this year."

"It is most unfortunate but perhaps correct to say that any further significant progress on climate change negotiations is highly unlikely in the near future. The question then is what about the most vulnerable countries," His Excellency President Tong said before a dinner he hosted at the State House for the delegation.

"I would like to take this opportunity to commend your instrumental role in reminding the world of this crisis. I also applaud your tireless efforts in bringing this issue before the Security Council, highlighting its security implication."

"Kiribati had for several years been one of the few lonely voices on the international stage advocating the urgency of climate change. So we were and are deeply grateful to you for lending your support in focusing world attention on the need for urgent action."

"I propose that the only way forward for fast tracking everything is political commitment."

President Tong emphasized the need for climate change-related funds to be operationalized to ensure vulnerable countries like Kiribati could begin to implement realistic urgent adaptation measures on climate change.

Both the Secretary-General and the President of Kiribati, His Excellency Anote Tong, agrees that time is now the scarcest resource in addressing climate change.

"I will keep pressing for progress until we get real results" the Secretary-General said.