U-17s Gear up for OFC Champ 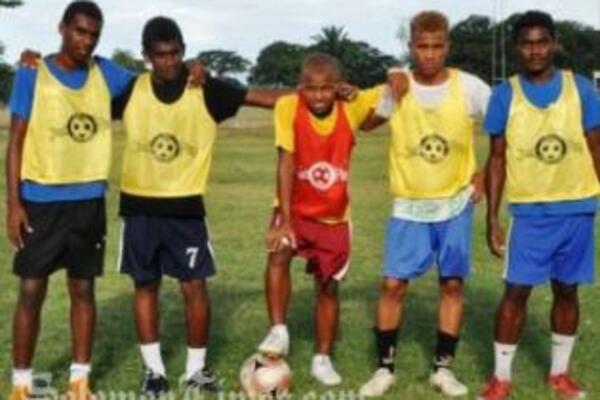 The Solomon Islands national U-17 team training squad players for the Oceania Football Confederation (OFC) U-17 championship are stepping up their performance as they approach axing time only 2 weeks from now.

The training squad players are mostly from the SIFF LEARN & PLAY team that won the TVL International U-16 championship in January this year but additional players have been selected to strengthen the composition of youth side.

The team has spent the last few weeks going through their daily sessions with coach Chris Asipara who is employing all the tricks in his book to get the players up to speed.

"We do not have the luxury of time so we are getting our heads into our preparations 100 per cent," Asipara said. "There are quality players in this team but definitely the competition at the OFC level will be tough so we need to be better than our opponents starting here."

Asipara is banking on the experience of certain players in the team who have represented Solomon Islands a number of times already.

One of such player is Fred Bala, who has put on his boots for Solomon Islands 3 times already starting with the OFC U-12 football festival in Papua New Guinea in 2007.

Bala has since played for Solomon Islands in the national U-14 squad against Schools Soccer Port Moresby in 2008 and then in January this year with the SIFF LEARN & PLAY team at the TVL International youth championship in Vanuatu.

SIFF is also hoping to recruit flying flanker Gabriel Bosi when he comes over to Honiara to play for Malaita in the Our Telekom National U-20 Championship.

Bosi won the Player of the tournament award at the TVL International U-16 championship as part of the SIFF LEARN & PLAY team and is one of the most promising youth players in Solomon Islands.

Head of Delegation Phillip Ohoto'ona says that Bosi is an uniquely skilled player who will bring strength to the U-17 team's attack and SIFF looks forward to meet with him when he arrives in Honiara.

This week OFC revealed the draws for the U-17 championship next year with Solomon Islands settling in Group B besides Cook Islands, New Caledonia, Tahiti and Tonga.

Defending champions New Zealand are in Group A as are American Samoa, Fiji, Papua New Guinea and Vanuatu.